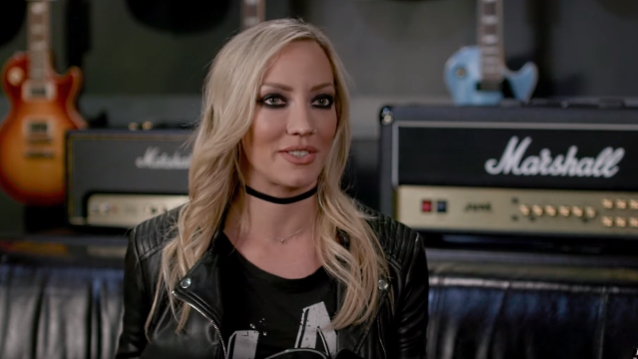 Nita Strauss, the Los Angeles-based guitar shredder for the ALICE COOPER band, has told the Long Island, New York radio station 94.3 The Shark that she didn't have any reservations about putting out an album of instrumentals with her debut solo LP, last year's "Controlled Chaos".

"Everyone said that I had to put out some tracks with vocals — that was the vast consensus among the people in the industry," she recalled (hear audio below). "And I have to say I'm really glad that Josh [Villalta, Nita's longtime boyfriend and manager] and I stuck to our guns and I put out the album I wanted to make. Maybe I could have made more money if I would have made it more marketable, maybe I could have had more success and [gotten airplay] on bigger radio stations and what have you, but it wouldn't have been the album I wanted to make. So I'm really, really glad… Sometimes, as an artist, you just have to stick to your guns and say, 'This is the album I wanna make.' And thankfully, for an instrumental guitar record to debut in the actual Billboard Top 200 — not in the instrumental Top 200, but in the real Top 200, and to be at No. 7 on the iTunes Rock chart, and No. 2 Best New Rock Artist on Billboard… It did really, really well, especially given that it has no vocals and the attention span of the modern person. So I'm really grateful, I'm really thankful to everyone that checked out the album and supported it, and I can't wait to play it live."

As well as wowing fans all over the world as Cooper's touring guitarist, gracing the covers of Guitar World and Guitar Player, performing for millions upon millions of WWE fans worldwide at "Wrestlemania" and "Evolution", becoming the first female to have a signature Ibanez guitar (which now hangs in the entrance to the legendary Guitar Center on Sunset Blvd ), breaking attendance records at guitar clinics across the country, playing "America The Beautiful" at the the Seattle Seahawks vs. Los Angeles Rams NFL game last year and being interviewed about her strict fitness regime in the likes of Muscle & Fitness Hers, Nita also found time to write, produce, engineer and record all guitar and bass parts on "Controlled Chaos".

Having launched a Kickstarter campaign to fund the recording of the record, which reached its goal in two hours and ended up being over 800% funded , Nita signed a deal with world-renowned independent record label Sumerian Records, which released the album worldwide.