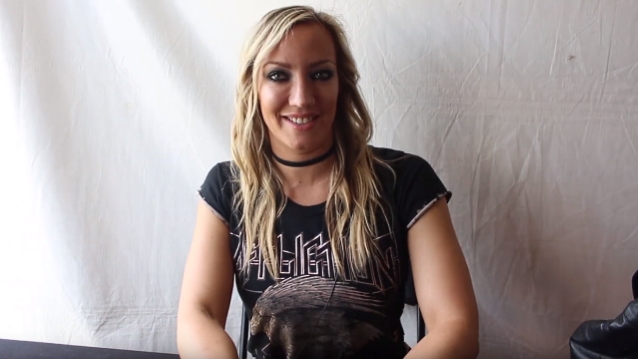 A day after joining EVANESCENCE onstage for a rendition of "Disappear" at this year's Epicenter festival in North Carolina, ALICE COOPER guitarist Nita Strauss praised frontwoman Amy Lee for her contributions to rock music.

"It was a dream," Strauss told Metal Nexus (video below). "Amy Lee and EVANESCENCE, she was a real trailblazer for women in music. And for me to get to stand on stage with her, and of course, the amazing band, Troy McLawhorn and Jen Majura, an amazing guitar attack, and Will Hunt on drums, it was an awesome experience."

She continued: "You just step in and do it. Jen and I got together in the dressing room before the show and we went over the song a couple of times and that was really it."

Asked how she balances the demands of her solo career as well as being a part of Alice Cooper's band, who will be touring with HALESTORM this summer, Nita said: "I actually don't have more than a week off until the end of November. And we're in May. [Laughs] I've been living on the road most of my life, so you get used to it. There's a Walmart everywhere."

Back in 2015, Majura revealed that Strauss was on Lee's short list of candidates for the guitarist slot in EVANESCENCE before Majura herself landed the gig.

Strauss appears on Cooper's 2018 live album "A Paranormal Evening At The Olympia Paris", as well as six of the live bonus tracks that appear on some versions of Alice's 2017 album "Paranormal".