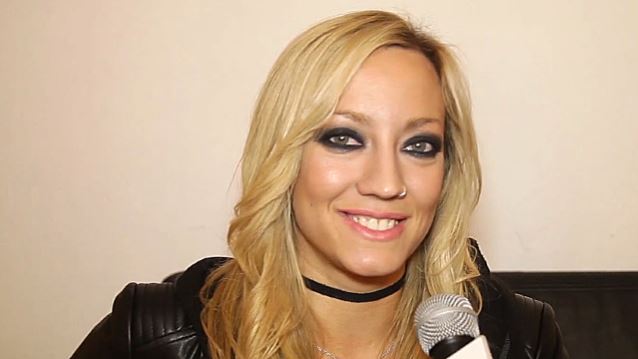 Chile's On The Rock recently conducted an interview with Nita Strauss, the Los Angeles-based guitar shredder for the Alice Cooper band. You can now watch the chat below.

Asked what it has been like touring with Cooper, Nita responded: "It's been really amazing. Playing with Alice is a dream come true. He's really a true professional and a great person to learn from. He's very, very humble, very cool with fans. It's been a great, great experience. And, of course, the guy is crazy on stage. He never gets tired! I'm younger than him, and I get more tired than he does, I think."

Nita also talked about Alice's enduring musical influence. She said: "I always was a fan of Alice Cooper's, but I got a new appreciation for his music playing in his band. It's really amazing to see how his music transcends age. We have fans in their fifties, sixties, you know, and then we have young fans that are ten years old wearing the makeup and singing all the words to the songs. So it's great to see music like his, great classic rock that's just timeless."