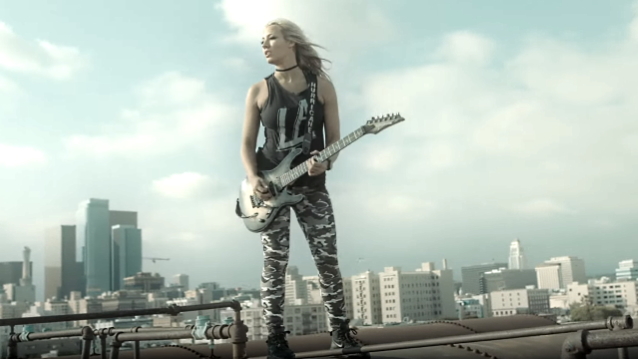 Nita Strauss, the Los Angeles-based guitar shredder for the ALICE COOPER band, has released the official music video for the song "Alegria". The track is taken from her first solo album, "Controlled Chaos", which was released in November 2018 via Sumerian Records.

Nita recently confirmed that her second solo LP "is very much on the way." The disc is tentatively due in late 2020.

This past September, Nita told Heavy1 TV that she wrote the majority of "Controlled Chaos" while she was on a previous tour with Alice Cooper, adding that she was "falling right back into the pattern of writing my album on days off. I've got my Pro Tools rig out here, so I'm just writing and recording. And we'll do some more clinics, do some more solo touring, do some more touring with Alice, and then I'm hopeful for a second album release in late 2020."

Asked if she will do any singing on her upcoming LP, Nita said: "No. I want people to enjoy it. So I'm not gonna sing."

Earlier this year, Nita told the Long Island, New York radio station 94.3 The Shark that she didn't have any reservations about putting out an album of instrumentals with "Controlled Chaos".

"Everyone said that I had to put out some tracks with vocals — that was the vast consensus among the people in the industry," she recalled. "And I have to say I'm really glad that Josh [Villalta, Nita's longtime boyfriend and manager] and I stuck to our guns and I put out the album I wanted to make. Maybe I could have made more money if I would have made it more marketable, maybe I could have had more success and [gotten airplay] on bigger radio stations and what have you, but it wouldn't have been the album I wanted to make."

The 11-track "Controlled Chaos" was a challenge to Strauss and an opportunity for her to reconnect with what inspired her to start playing guitar when she was just 13 years old.

"I started playing guitar because of instrumental guitar music," she said. "All my real heroes made instrumental albums. All my own career has been spent playing in bands, but I never forgot that dream of what inspired me to pick up the guitar in the first place."

"Controlled Chaos" reached No. 1 on Billboard's Heatseekers Albums chart and No. 6 on the Hard Rock Albums chart.