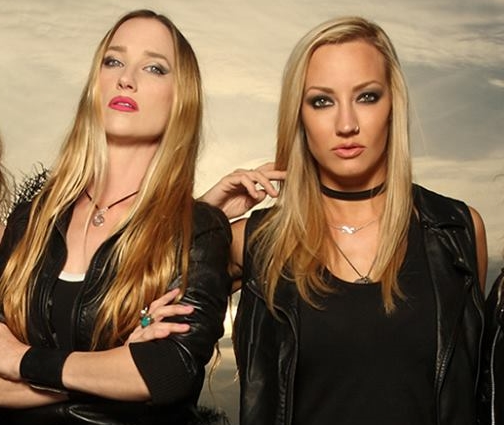 Nita Strauss, the Los Angeles-based guitar shredder for the ALICE COOPER band, has paid tribute to her THE STARBREAKERS bandmate Jill Janus, calling the singer "passionate, generous" and "supportive to a fault."

Janus, who was also the frontwoman for the California heavy metal band HUNTRESS, passed away on Tuesday, August 14. A longtime sufferer of mental illness, she took her own life outside of Portland, Oregon.

Earlier today, Nita took to her Facebook page to write: "The first time I met Jill Janus was in 2009. HUNTRESS had just released their first record. On the first day of the tour, Jill bounced into every dressing room in the building, wearing an undecipherable black metal logo shirt and chirping, 'Hi! I'm Jill from HUNTRESS. This is our dog, Party Time' while thrusting this tiny chihuaua with a spiked collar in everyone's face. I remember thinking... this girl is WAY different from any musician I've ever met. I didn't realize then HOW different, or that I would share the stage with Jill so many times. From belting out [IRON] MAIDEN songs at my birthday party to our cover band, THE STARBREAKERS, Jill brought that same level of enthusiasm to everything she did.

"Jill got sober shortly after I did. I remember when she finally got sober, the next time I saw her at rehearsal, she brought me an amethyst pendant she had made herself with the AA symbol attached. 'This will keep you safe, and strong,' she told me. 'Just keep it near you.' It HAS kept me strong, more so than she probably knew. I told her not too long ago about the many times I had escaped to bathrooms at events or bars and taken her little charm out of my purse to hold it and remind myself not to drink. She loved it. She made me take the pendant out of my purse to show her. I still have it with me now.

"Jill struggled with depression and mental illness for most of her life. I wouldn't have known it unless she spoke about it so publicly. As a friend, she was kind, passionate, and generous, supportive to a fault, and ALWAYS willing to go the extra mile. Her vocal range was like no one I ever heard (she covered five octaves during our shows) and her dynamic performance style made everyone who saw her an instant convert.

"Thinking of my friend alone somewhere in a dark enough place to take her own life is more than I can fathom.

"Sending all the strength and love in the world to her HUNTRESS band mates and loving boyfriend Blake... it was an honor to know your girl.

"Miss you, love you, and hope you have found the peace you needed."

The first time I met Jill Janus was in 2009. Huntress had just released their first record. On the first day of the...