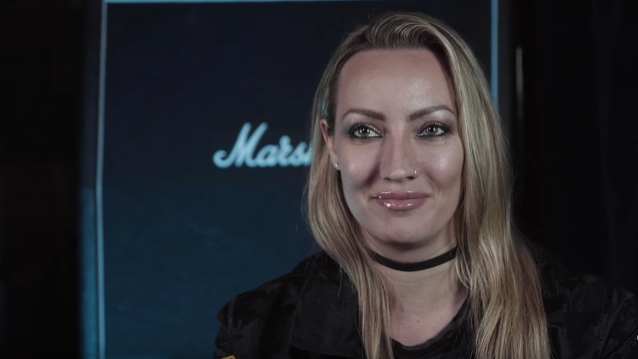 Sumerian Records has released a new three-minute video in which its recording artist Nita Strauss, the Los Angeles-based guitar shredder for the ALICE COOPER band, talks about how she became the in-house guitarist for the Los Angeles Rams American football team.

"The Rams introduction actually came through our good friend and very surprising source, the pro wrestler Diamond Dallas Page," Nita explains. "Dallas now has a yoga program, DDP Yoga, and a rehabilitation program that works with a lot of pro athletes, and one of the athletes that he worked with was a player on the L.A. Rams. So he made the introduction for us, and the next thing I knew, I got the call to play at the Salute To Service game in [November] 2018, to play 'America The Beautiful'. I went on to play at the Sunday night football game, still at the Coliseum, and it went so well, we got along so great with everyone in the organization, and after that, they contacted me about becoming a more permanent part."

Strauss went on to say that she is thrilled to be involved with the Rams franchise.

"I'm a lifelong sports fan, I grew up in competitive sports right here in L.A., so to get to play for an NFL team in my hometown, 10 miles from the hospital that I was born in is an absolute dream come true," she said.

Because of the COVID-19 pandemic, the NFL's regular-season games in 2020 were played in stadiums with few or no fans.

Seven years ago, Strauss was chosen by Gene Simmons and Paul Stanley of KISS to be the official in-house guitarist for the L.A. Kiss arena football team, which was based out of the Honda Center in Anaheim.