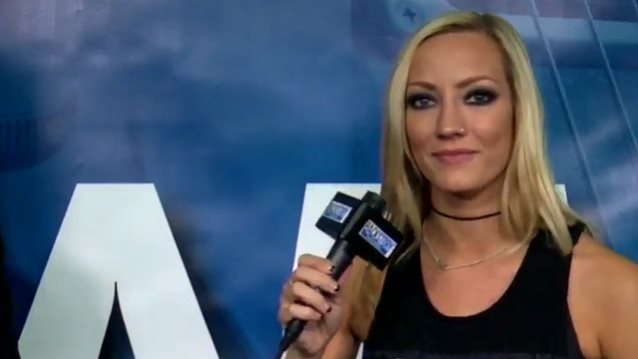 Brad Tolinski of BackStory Events conducted an interview with Nita Strauss, the Los Angeles-based guitar shredder for the ALICE COOPER band, at this year's NAMM show, which was held January 19-22 at the Anaheim Convention Center in Anaheim, California. You can watch the chat below.

Strauss recently released a brand new solo single titled "Pandemonium". Written, recorded and produced by Nita, the song features the axewoman on all guitar and bass, alongside her boyfriend and manager Josh Villalta on drums and Katt Scarlett on keyboards.

The drums were recorded at Sable Studios while the track was mixed and mastered by Travis Huff at Nocturnal Studios.

The official video for "Pandemonium", produced by Flarelight Films, LLC and directed by Brian Cox and Corey Soria, can be seen below.

"We did that video… We were planning on just releasing a SoundCloud link for this song, and then my boyfriend Josh looks at me a week before the premiere date and he goes, 'Let's go make a video for it,'" Nita said. "And I said, 'What? Now? We don't have time.' And he said, 'Just let me worry about that.' And I said, 'Okay.' And sure enough, we threw together a video in four days and got it ready to premiere. And, for me, it really encapsulated the song. It's a raw, aggressive song, and we shot kind of a raw, aggressive video. And it came out exactly how I wanted it to."

Regarding her plans to release more solo music, Nita said: "We've got four months off with Alice, which is a rarity in our world. So I'm gonna take these next four months. I've put together my own band, [I'm] working on original music and hoping to have something out before I leave again in April."

Strauss told Ultimate Classic Rock about her upcoming album: "I started writing music, and it turned into something that sounded like it needed to be a band. It didn't sound like something that was indulgent enough to just be like, 'This is the Nita show.' They sounded like band songs. I'm a band person. I might come across like kind of a show-off onstage and stuff, but I like collaborating with people. So I threw together a great group of girls. I thought it needed a great female lineup, and I think I've almost got it the way that I want it now."

"Pandemonium" is featured on Favored Nations Entertainment's all-female compilation "She Rocks, Volume 1". This collection of kick-ass guitar goddesses is produced by Tolinski with iconic guitarist Steve Vai as executive producer, and showcases eleven female guitarists, each a virtuoso in her own right.