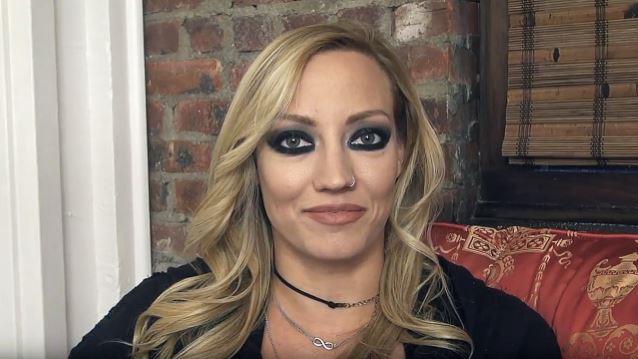 Rock Scene recently conducted an interview with Nita Strauss, the Los Angeles-based guitar shredder for the ALICE COOPER band. You can now watch the chat below.

Speaking about her early guitar influences, Strauss said: "My first influences, absolutely, is Steve Vai; it definitely has always been about Vai. And I think I'm still aspiring, at this point in my career, to be as cool as Steve Vai was in [the movie] 'Crossroads', or as cool as Steve Vai is in general. And then, of course, I was always into the 'shred' stuff — I was always into [Joe] Satriani and Marty Friedman and Jason Becker and Paul Gilbert and DREAM THEATER — I've always looked up to this high level of playing, and I think if you look up to this high level, if you reach for the high level, that's the only way to attain good technique — is to compare yourself and aspire to the greatest musicians."

She continued: "It never really occurred to me to seek out a female influence, a female musician. I get asked a lot, 'Who were your heroes growing up? Was it Lita Ford and HEART?' It's so interesting for me, 'cause it never occurred to me to think about something like that. Say, 'I'm a girl, so I have to find a girl to look up to.' Of course, now, there's so many incredible female guitar players — the greatest, of course, I think, being Jennifer Batten and there's Orianthi and Courtney [Cox] and Nikki [Stringfield] from THE IRON MAIDENS, and Gretchen Menn and Nili Brosh — there's so many incredible female guitar players out now that it's so cool to be a small part of that wave. And I see a lot of parents now bringing their kids to shows and I get a lot of messages on Facebook and Instagram and stuff like that saying, 'I brought my daughter to the show and then the next day she asked for a guitar for her birthday.' And that's probably the coolest thing that I can even think of at all in the world. If one little girl each day says, 'I want a guitar for my birthday,' then we did a good thing that day."