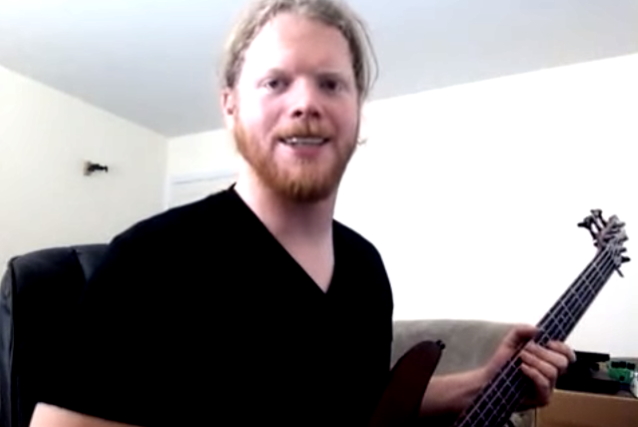 NILE leader Karl Sanders has paid tribute to the band's former bassist Joseph Payne (pictured), who died earlier this month at the age of 35. No cause of death has yet been revealed.

Sanders took to his Facebook page earlier today to write: "The members of NILE were saddened this weekend to learn of the passing of one of our own, Our Dear Metal Brother Joe Payne.

"We have no details as yet what caused this tragedy, but his loss is a profound one. During Joe's time with NILE in 2005-07, Joe was a true brother and band member in every sense of the word. He always gave 110% onstage every day, was full of positive enthusiasm, and was a brightly burning Spirit.

"Joe joined us at the tender age of 19, on recommendation from Kreishloff of LECHEROUS NOCTURNE. Possessed of an incredible talent beyond his years, Joe was never afraid to face any of the challenges in stepping onto the world's stages; the very first obstacle of course was learning the entire NILE set and stepping into the uncomfortably large shoes of recently departed legendary NILE bassist Jon Vesano. Just being able to play those difficult NILE songs on bass while doing Jon's vocal parts was a herculean task, let alone pulling it all off convincingly in less than a week. But Joe fearlessly stepped up, and boldly walked out on the stages all across Europe to help promote the 'Annihilation Of The Wicked' album. Joe of course killed it from the first note, nailing the songs with an awesome stage presence and a supernova of metal energy. It became immediately clear that Metal was what Joe was born to do.

"The next 2 years of Touring for AOTW were an exceptionally busy time for NILE, and Joe's fire and will to conquer never let up, not for a single moment. On and off stage, Joe was a great band member, traveling companion, and friend.

"The time Joe spent with us is something we will remember always.

"Rest in Peace, Brother Joe, You are a True Metal Warrior."

Back in December 2012, Payne made headlines when was arrested in connection with an investigation into the distribution of more than 2,900 grams of marijuana in the Iredell County area in North Carolina.

The members of Nile were saddened this weekend to learn of the passing of one of our own, Our Dear Metal Brother Joe...