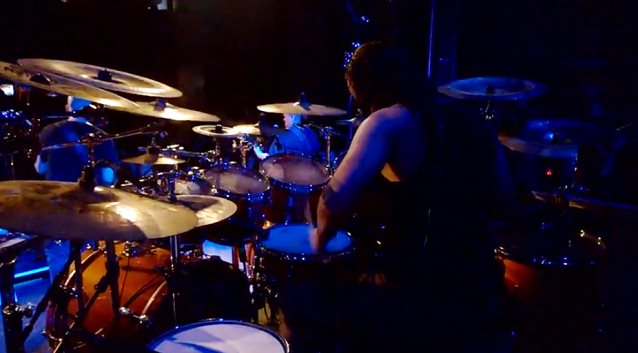 Drum-cam footage of NILE's George Kollias performing the song "The Inevitable Degradation Of Flesh" during the band's April 21 concert at Foufounes Électriques in Montreal, Quebec, Canada can be seen below.

In a recent interview with the Syracuse Music Examiner, NILE's Karl Sanders stated about the band's plans for a new CD: "Actually we are writing songs for the next record. We took a break to do this [current North American] tour. We have a new record in the works and we are excited for it, yeah! It's what we live for!

Regarding NILE's last album, 2012's "At The Gate Of Sethu", Karl said: "It's a NILE record. It's brutal death metal and has exotic elements and deals with lyrics derived from ancient Egyptian histories, mythologies and so forth. That part's the same. The approach we had on that record is it's a very surgically clean record, a precise capture of the musicianship. I think that is really where the focus was; we wanted to capture as cleanly as possible what we were actually playing and present in that simple kind of light to people. Simple, honest — this is how we play. No fancy production."

Asked for his thoughts about the Internet and how it has affected bands, fans, and musicianship, Karl said: "The Internet has changed the entire music business. For those of us that were around before the age of the Internet, it's a completely different world. None of the old rules apply anymore; it's change-and-adapt or die. A lot of people have to change their way of thinking or the way to make a dollar to make a living and keep going. There are no more CD sales. There are some, and it's getting harder to make a living on tour with the rising cost of touring. Everything goes up except the amount of money that we get paid."