The reigning kings of technical, historically-themed brutality NILE are currently in the studio wrapping up the mix of their upcoming album, "What Should Not Be Unearthed". Produced by NILE and mixed by Neil Kernon, the CD will be released on August 28 via Nuclear Blast. The artwork was handled this time by Michal "Xaay" Loranc and can be seen below. Pre-order your copy here.

Comments NILE mastermind Karl Sanders: "All of us in NILE are happy to announce our upcoming newest album, 'What Should Not Be Unearthed'. It's our eighth official album, and this time we believe we have a truly crushing disc to bring to metal fans.'

"The focus this time around is on brutally heavy metal riffing and songwriting; kind of like of an 'Annihilation Of The Wicked' approach but very streamlined to achieve maximum destructive impact."

He continues: "Our last record, 'At The Gates Of Sethu', was super surgically clean and very 'musicianship oriented' whereas the new disc is a polar opposite; 'Unearthed' is aimed straight at utter metal heaviness and memorable songwriting.

"Although 'Unearthed' is still full of the kind of undeniable musicianship people have come to expect from NILE over the years, it's the songs themselves that will hit listeners over the head this time around."

Sanders adds: "These songs will be a blast to play live, and we are stoked at the opportunity to bring these songs to metal fans everywhere. See you on tour!”

States Xaay about the artwork: "At first, I would like to express that it was great experience to work on another NILE cover / artwork again. I'm really grateful having been a big fan of the band for all these years.

"The story behind the title goes deeply beneath everything we have already known, and we may not be ready to face. With the art I excavated the theories of an elder ancient civilization which could give the origin to ancient Egypt. That's why you can find a new ingredient in the band imagery, pointing at some higher obscure intelligence, eroding and covered with time. That trace of a dismal legacy is resembled in the outer structure which radiates from the block, sealing the unknown, and it's only an adumbration of what we will meet, once it is removed.

"The pyramid-shaped seal in the center doesn't contain a recipe for some Camel Stew or a Pharaoh's dining menu. An experienced eye will notice hieroglyphs taken from the 'Book Of The Dead', or the Seven Islands of Amentet glyph — depicting the ancient Underworld, and describing the elder reign of God-kings, which had ended circa. 9850 B.C. (perhaps some similarity with that of Atlantis?). But the main thing we should not miss here is a winged scarab sign in the exact center. We all know this most common Egyptian artifact giving protection... so the message is pretty clear... I hope it may become another fine element in band's repository for the NILE-themed tattoos.

"To sum it up: this album is definitely not a box of candies. Keep in mind that opening the package means you will deal with the deadliest essence... However, it will be a hard task to hold on to your curiosity. Well... it's a new NILE!"

NILE will hit the road in Europe with their labelmates SUFFOCATION at the end of August. Confirmed dates are as follows: 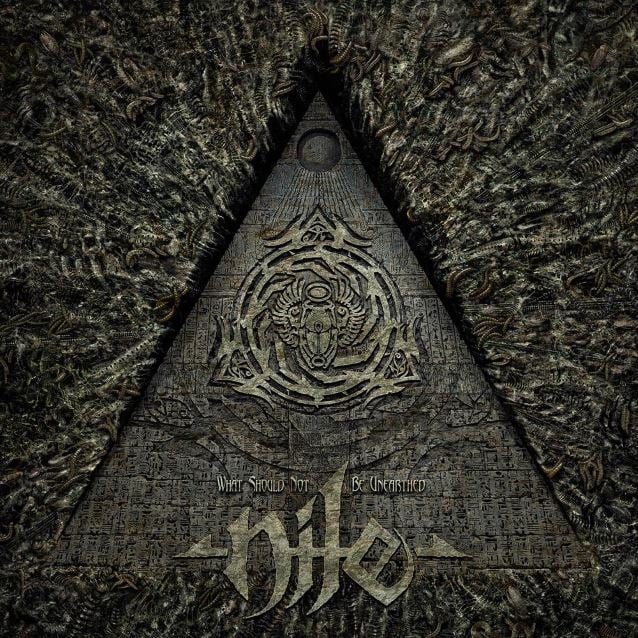 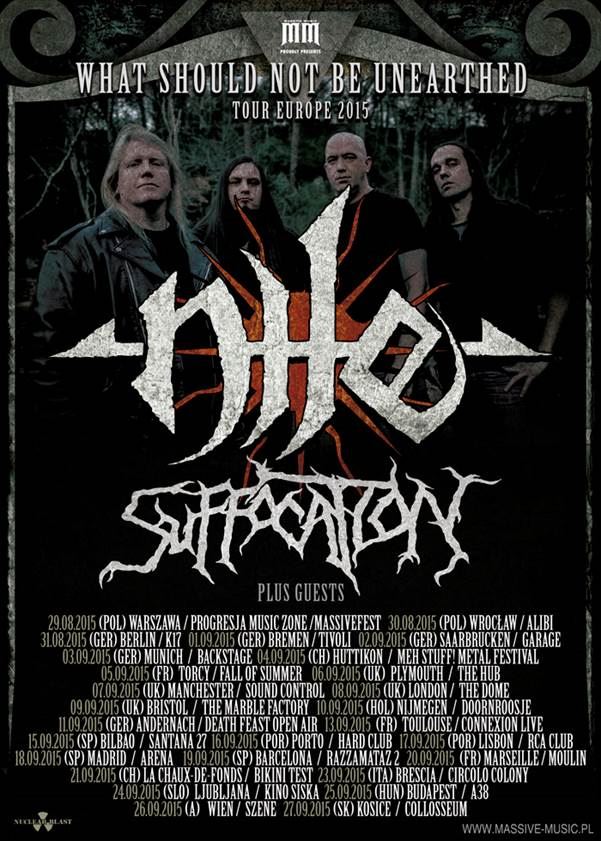