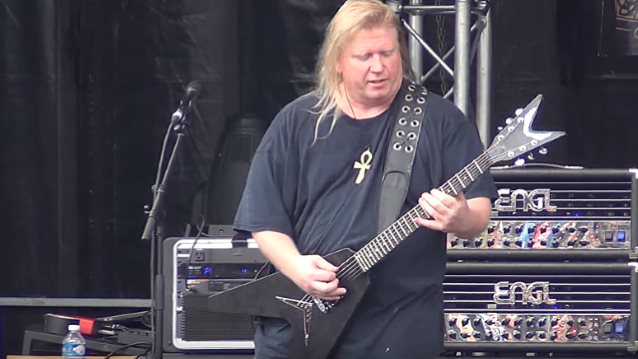 Karl Sanders of South Carolina-based extreme technical death metallers NILE was interviewed on a recent edition of the "Neckbreaker" podcast. You can now listen to the chat using the SoundCloud widget below (starting around the one-hour, 53-minute mark).

Speaking about how the licensing rates for streaming music are threatening the livelihood of songwriters and artists, Karl said: "Well, the digital medium is the newest way to completely rip off the artist. We don't get paid for that shit. I mean, you're talking about a hundredth or a thousandth of a penny if — and I say 'if' with big capital letters — if you can actually collect, but you can't. Because chasing the digital trail is damn near impossible. So you can't get paid. You're not getting paid, despite what they fucking say. And there's legislation in front of Congress. You can't get fucking paid. You're not gonna get paid. So we're very thankful for the fans that actually go and buy physical product, 'cause those are the fans that are keeping metal alive."

Asked about Spotify's previous attempts to demonstrate how the company can help with exposure to bands' concerts and merchandise, Karl said: "They can go fuck themselves. I call bullshit on that. It's exploitation — complete exploitation. They're using that to generate revenue for themselves, not for us. And if they were giving exposure to us, they could have very well given that to Joe Schmoe and his group from down the street where I live. But no, they play a NILE or a CANNIBAL CORPSE, or a whoever, they play that name so they would collect the money from it. So them and their exposure can go fuck themselves."