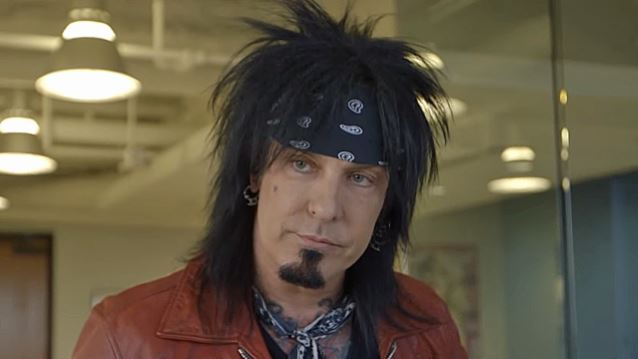 MÖTLEY CRÜE and SIXX:A.M. bassist Nikki Sixx has weighed in on the strange situation regarding AC/DC and singer Brian Johnson. The legendary Australian rock band postponed the last ten dates of its recent North American tour after doctors told Johnson he faced "total hearing loss." AC/DC has since announced that it will use GUNS N' ROSES singer Axl Rose as a "guest vocalist" when it resumes its tour next month, with Johnson apparently not returning to the band at all.

Speaking to Post-Gazette.com, Sixx stated about the prospect of an Axl Rose-fronted AC/DC: "I think Axl's got the right voice for that. Brian's a friend. I'm a huge fan of AC/DC from back in the day. I was devastated when Bon Scott passed away and I didn't think they could survive that. Brian means so much to AC/DC. I don't know the inner workings, but if they have to go and do shows, I think Axl's got the right voice."

AC/DC guitarist Angus Young made a guest appearance with GUNS N' ROSES at the Coachella festival in California earlier in the month, to tie in with the official confirmation of Rose's involvement.