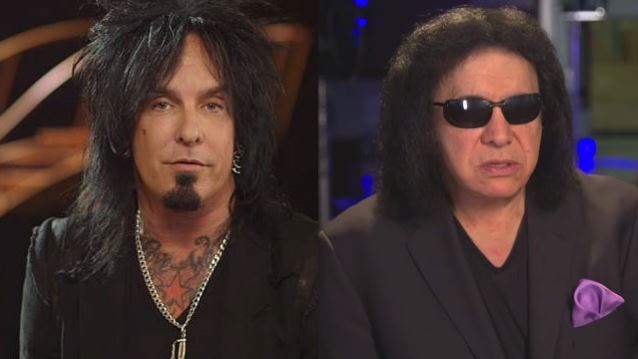 MÖTLEY CRÜE bassist Nikki Sixx has slammed KISS bassist/vocalist Gene Simmons for suggesting that people who suffer from depression should kill themselves.

In the interview that Simmons gave to SongFacts.com, he was asked if he still got along with original KISS members Ace Frehley and Peter Criss. He replied: "I don't get along with anybody who's a drug addict and has a dark cloud over their head and sees themselves as a victim.

"I never understand, because I always call them on their bluff. I'm the guy who says 'Jump!' when there's a guy on top of a building who says, 'That's it, I can't take it anymore, I'm going to jump.'

"Are you kidding? Why are you announcing it? Shut the fuck up, have some dignity and jump! You've got the crowd.

"By the way, you walk up to the same guy on a ledge who threatens to jump and put a gun to his head, 'I'm going to blow your fuckin' head off!' He'll go, 'Please don't!' It's true. He's not that insane."

Sixx, who has openly shared his struggles with addiction and his success in recovery, took exception with Simmons' comments, saying that people who are suffering from depression should not "listen to people who don't know what they're talking about."

During last night's episode of his "Sixx Sense With Nikki Sixx" radio show, Sixx said: "It's pretty moronic [of Gene to say what he said], because he thinks everybody listens to him, that he is the god of thunder and he will tell you he is the greatest man on earth. And, to be honest with you, I like Gene. But in this situation, I don't like Gene. I don't like Gene's words, because … there is a 20-year-old kid out there who is a KISS fan and reads this and goes, 'You know what? He's right. I should just kill myself.'

"If I had killed myself, my four beautiful children would not be here today.

"I wanted to talk about what I've done with my recovery and my depression and something I think Gene should use as a model.

"I got off the drugs and alcohol and it was the hardest thing I ever did in my life. I didn't think I could ever be off the heroin, to be honest with you. I got off the heroin and I couldn't leave my house. I didn't have any social skills, I didn't know how to interact with people. I pretty much started to go deeper and deeper and deeper into a depression. So I went to a therapist. And it was the first time I had ever been to a therapist. And I said, 'I just feel hopeless.' Now, if I went to see Gene Simmons, he would have said, 'Well, you know, Nikki, if you're depressed, you should just kill yourself.' But this therapist said, 'Hey, there are ways out.' And he gave me an experimental drug at the time called Prozac, and it got me on the right path. And then I got off of it. And I got out of my depression. And I then went to have these four beautiful children, I wrote the 'Dr. Feelgood' album, I've had a wonderful life. I did not take that way out.

"And what I'm saying is: for people who are depressed, there is a way out. There are many, many ways out. And I don't want people to listen to an interview from a rock star who's telling you the only way out is out, when I'm telling you, and I wrote it in [my book] 'The Heroin Diaries', you can get out of this…

"One in 10 Americans are affected by depression at one point in their life, so this is another thing to think about. At one point in your life, meaning it will come and it will go…

"They say all bad things must pass, all bad things will pass. So keep that in the back of your mind if you're feeling depression, and don't listen to people who don't know what they're talking about."

You can listen to Sixx's response to Simmons' comments at this location.

I actually agree with @NikkiSixx taking a stand against @GeneSimmons - how insensitive can you be just for publicity? Sad @BLABBERMOUTHNET