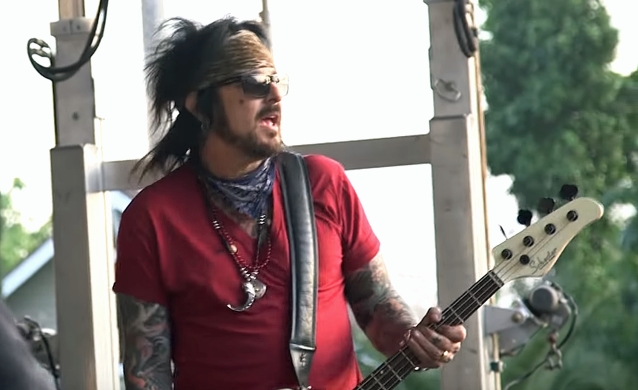 CHEVY METAL is the cover band led by Taylor Hawkins and Wiley Hodgen of FOO FIGHTERS.

Hawkins's 11-year-old son, Oliver Shane Hawkins, sat in on drums for a cover of THE ROLLING STONES classic "Miss You".

Grohl appeared with CHEVY METAL to cover THIN LIZZY's "Jailbreak", BLACK SABBATH's "The Wizard" and THE ROLLING STONES' "Bitch" and the aforementioned "Miss You".

Proceeds from the "Eat, Drink And Support" are being used to serve many meals to hungry Angelenos this holiday season.

A film adaptation of the band's 2001 autobiography, "The Dirt", will premiere on Netflix in March. The soundtrack is expected to include four new songs MÖTLEY CRÜE recorded earlier this year with producer Bob Rock.