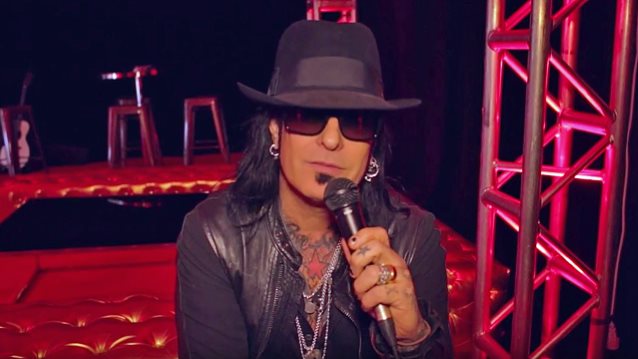 Nikki Sixx has commented further on his war of words with KISS members Paul Stanley and Gene Simmons over Simmons's admittedly callous remarks regarding Prince's death, saying that "we just kind of look like a bunch of old women fighting at this point."

On Sixx's radio show, the MÖTLEY CRÜE and SIXX:A.M. bassist slammed Simmons — who's since apologized — saying: "His heartless and uneducated remarks about Prince's death shows why he's not my hero anymore or anybody's. I think that he is an overrated, lucky guy that dresses like a clown. He wrote some good songs, but hasn't in a long time, and loves to brag about himself."

Stanley responded on his Facebook page, knocking Sixx, by saying, "Jesus Christ, Nikki Sixx! Would you please shut up, find another way to be in the news and get off your self-inflated pedestal? Regardless of some things Gene Simmons has said that I may take issue with, his influence on musicians (you included) is undeniable and will continue. More importantly, his work, generosity and monetary contributions to numerous causes and charities for those less fortunate makes your ongoing rant, in the scheme of things, the unimportant but annoying squeak it truly is. Move on."

Well, "Loudwire Nights" host Toni Gonzalez caught up with Sixx before SIXX:A.M.'s gig at Rock On The Range this past weekend, she asked the bassist about the feud. He responded: "To be honest with you, I only really said one thing about Gene. The problem with having a five-hour radio show five days a week, and then we do three 'Countdown' shows on the weekend, is I talk. And the problem is that sometimes you will say something, you have an opinion about something, and [the media] will take just that fifteen seconds, and that gets magnified."

He continued: "I have a lot of opinions, just like you do, and anybody watching this interview, or listening to this interview, has, and if you only take those things and amplify 'em, it can get blown out of proportion. And what happened in this situation is I did have an opinion, and it got blown out of proportion, and then Paul said I was beating a dead horse. I actually wasn't; the press was beating a dead horse."

Sixx added: "You know, I'll just be honest with you. [When] I [was growing] up, I loved KISS. They influenced me as a songwriter. KISS gave MÖTLEY CRÜE one of their very first tours. They've done a lot of great stuff for me in my life. I've co-headlined tours with those guys, I've known 'em forever. Gene's a very opinionated man, and so am I.

"I'll be honest with you, I think we just kind of look like a bunch of old women fighting at this point. I love you guys. Like, whatever… it's all good. We're not getting in the ring and fighting over this.

"And I will say: great for Paul for standing up, not only against Gene but against me. I think that we need to be strong. It's cool."

Stanley, who was the first to slam Gene for calling Prince's alleged death from prescription drugs "pathetic," told The Pulse Of Radio that he thought Sixx was feigning outrage to keep the story alive in an effort to score ratings at KISS's and Simmons's expense. "Look, I think what Gene said was questionable, and I certainly took offense to some of it," he said. "But, y'know, I think he sometimes speaks without giving, y'know, full thought to what he's saying and then comes to regret it afterwards. But, y'know, that being said, for other people to just harp on it is just not something that I want to sit by and listen to. Y'know, when someone starts to denigrate or take pot shots at your contributions, or your band, or, y'know, anything else — if you consider the source, it gets a bit ludicrous."