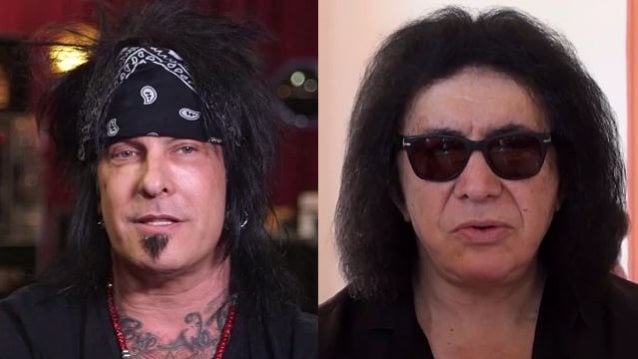 MÖTLEY CRÜE and SIXX:A.M. bassist Nikki Sixx says that he has "no respect for Gene Simmons" after the KISS co-founder's statement that the death of Prince was "pathetic."

Earlier this week, Simmons received backlash from friends, family and fans after insinuating that Prince died from a drug overdose. Sixx also ripped Simmons on Twitter, saying his "recent heartless and uneducated remarks about Prince's death shows why he's not my hero anymore or anybody's."

During an interview with the WNOR FM99 radio station this past Wednesday (May 11), Sixx was asked about Gene's comments and the impact that Prince had on the world of music. He said: "Gene Simmons taking swipes at Prince without actually having the information is what I said #FromHeroToZero. We have no respect for Gene Simmons anymore; nobody in rock does. And I'm not gonna sit back quietly as a person [and] allow a bully to go out there and put down people he doesn't know anything about. The last thing that me and Gene got into is he said that if people are depressed, they should kill themselves."

He continued: "I think that Gene should call it a day, and that we should look at this beautiful catalogue of music that Prince has given us. And if you wanna compare Prince to KISS, I mean… okay, c'mon. There's no comparison. Prince has been an amazing artist. He's kept his standard high over the years and was never just about money and ego; it was about music."

Simmons on Wednesday took to Twitter to clarify his remarks about Prince. He explained: "I apologize — I have a long history of getting very angry at what drugs do to the families/friends of the addicts. I get angry at drug users because of my experience being around them coming up in the rock scene."

Prince died on April 21 at his home in Minnesota, but no cause of death has been identified just yet. A law enforcement official told the Associated Press that his death was being investigated as a possible drug overdose.

Over the years, Simmons has never hidden his feelings about drug use, even when his bandmates were involved. He told The Pulse Of Radio that drugs are the number one reason for bands failing to live up to their potential. "I have no sympathy at all for anybody that doesn't have enough self-respect for themselves and for their bandmates, because when one guy decides that his dalliances with crazy things is more important that the welfare of his band, that guy doesn't deserve any success," he said. "Because a team is a team, and every guy's gotta carry the weight. You're only as good as your teammates."

MÖTLEY CRÜE and KISS co-headlined a North American tour in the summer of 2012.

.@genesimmons recent heartless and uneducated remarks about Prince’s death shows why he’s not my hero anymore or anybody’s. #FromHeroToZero