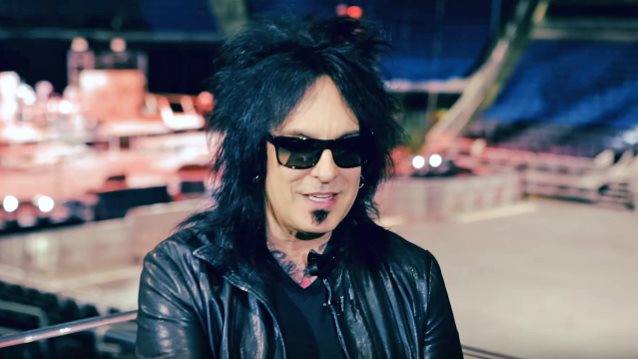 Sixx, who detailed his near-fatal drug addiction in the best-selling book "The Heroin Diaries", welcomed several guests for an in-depth discussion about what can be done to alleviate the massive suffering and loss happening across the country due to heroin and opioid addiction and overdoses.

A three-minute clip from yesterday's show, in which Sixx describes hitting rock bottom, is available below.

"Sixx Sense With Nikki Sixx" is nationally syndicated by Premiere Networks on more than a hundred and thirty affiliates nationwide. The show is also available on SixxSense.com and the show's iHeartRadio channel.

The 58-year-old Sixx struggled with substance abuse for years and was even supposedly declared clinically dead after a heroin overdose in 1987 made his heart stop for two minutes. He has since become actively involved in a recovery "program," which he credits for helping him transform his life and relationships.

"By letting go of self and ego, working a program that connects you to a higher power and giving back to those still struggling are just some of the important things you learn through sobriety," Sixx wrote when he celebrated nine years of sobriety in July 2013. "You get to repair the damage done from drink, drugs and horrific behaviors (that broke people's hearts who loved you."

He added: "For me, taking away the substance just gave [me] an honest view of who I had become and then the healing started. I do believe without any program to help, many are just dry drunks and there is always a danger of them going out again. I've been there. It's not pretty. This is no joking matter to me, so I take it seriously."