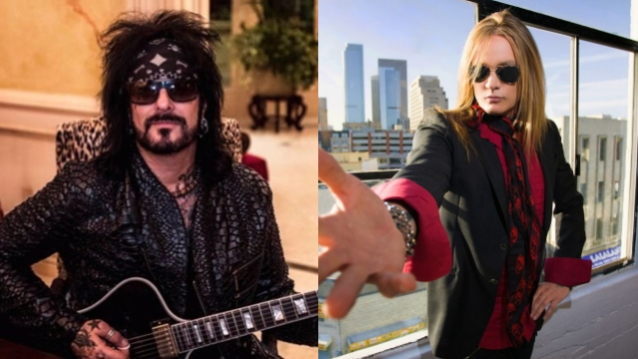 Nikki Sixx and Sebastian Bach are the latest hard rock musicians to call on lawmakers to enact tougher guns laws after back-to-back mass shootings in the United States left at least 29 dead and 53 injured in Texas and Ohio on August 3 and August 4.

In El Paso, a gunman opened fire as customers crowded into a Walmart during the busy back-to-school shopping season Saturday morning, leaving 20 people dead and another 26 wounded. Just hours after the El Paso attack, a mass shooting in Dayton, Ohio, left at least nine people dead and 26 wounded.

On Sunday (August 4), Sixx took to his Twitter to write: "It is not too soon to be talking about how [President Donald] Trump and [Senate Majority Leader Mitch] McConnell are enabling these violent acts by obstructing common-sense legislation that would make it more difficult for would-be mass shooters to obtain weapons designed to mass kill human beings.

"Mitch McConnell likes to think of himself as Grim Reaper, well today, the Senate's Grim Reaper made it easier for a Trump supporter to kill at least 18 people," he said.

Earlier today (Monday, August 5), the MÖTLEY CRÜE bassist added: "I don't know about you, but I'm fucking sick of hearing about innocent people being slaughtered city after city because the politicians chose money over passing stricter gun control laws."

After one of Sixx's Twitter followers pointed out that "Australia's last mass shooting was in 1996 and nothing since due to harsh gun reforms..America's 'gun toting' attitude needs to change...", Sixx responded: "We refer to this often when talking about change and saving people lives.Imagine how many thousands of lives would have been saved if the politicians ( aka NRA puppets) would of followed suit."

For his part, Bach has repeatedly lambasted Trump, McConnell, Vice President Mike Pence and other Republican leaders for their inaction on gun regulation. "You and your useless Republican party don't give a fuck about the safety of the citizens of the USA," the former SKID ROW singer wrote in response to a tweet of consolation from Ohio Senator Rob Portman. "Your 'prayers' are a slap in the face to the 30 people who were mowed down yesterday because of your uselessness."

On Sunday, President Donald Trump said that "hate has no place in our country" and called the mass shootings "a mental illness problem. These are people that are very, very seriously mentally ill," he added.

Democratic presidential candidates Beto O'Rourke and Sen. Cory Booker have both said Trump is partly to blame for the shooting in El Paso due to his anti-immigrant rhetoric.

"This president is encouraging greater racism and not just the racist rhetoric, but the violence that so often follows," O'Rourke told CNN.

Acting White House Chief of Staff Mick Mulvaney dismissed the suggestion that Trump's rhetoric has in any way contributed to white nationalist violence.

"I blame the people who pulled the trigger," Mulvaney said in an interview on "Meet The Press".

Nefarious times we are living & dying in.I don’t know about you but I’m fucking sick of hearing about innocent people being slaughtered city after city in this great country because the ? politicians chose ? over passing stricter choose gun control laws. #TimeForChange ??

We refer to this often when talking about change and saving people lives.Imagine how many thousands of lives would have been saved if the ? politicians ( aka NRA ?puppets) would of followed suit. https://t.co/503RGch3ow

The details are that you and your useless Republican party don't give a fuck about the safety of the citizens of the USA. Your "prayers" are a slap in the face to the 30 people who were mowed down yesterday because of your uselessness https://t.co/jS5fnWGbMD