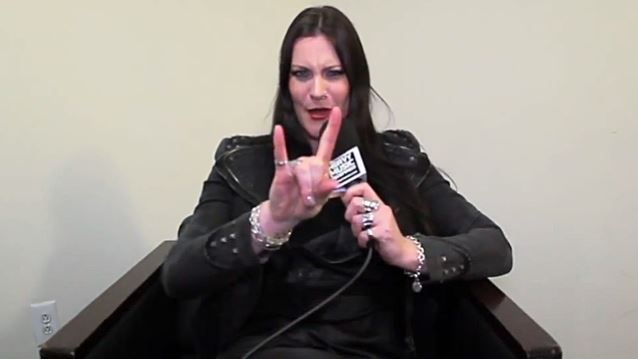 On April 9, Jo Schüftan of Horns Up Rocks! conducted an interview with NIGHTWISH singer Floor Jansen in New York City. You can now watch the chat below.

Asked what some of the things are that she does to ensure that she can deliver a powerful vocal performance every night on tour, Floor said: "There are very obvious ones I could say here, like I work out, I eat healthy, I sleep a lot — or enough, anyway. They are all very, very true. But I think a healthy dose of fun and letting go a little bit is equally important."

She continued: "I'm not the kind of singer that's always super, super careful. Because when I did that, it just bit me in the ass somehow. Because you need your fun, and you don't wanna overanalyze everything you do. So a good glass of red wine, or maybe a little bit too much every now and then is just fine. Heavy boozing, not so much, because you don't recover enough from it. But if there's a good party, then I think I should go with the flow. The only thing I always have to avoid is cigarette smoke and loud talking. That is not a diva thing; that is just a fact that it's really bad for your voice."

As previously reported, NIGHTWISH will release a new single, the title track of the band's latest album, "Endless Forms Most Beautiful", on May 8 as a limited-edition MCD, 10-inch vinyl and as a download.

The NIGHTWISH show in Vancouver, British Columbia on April 25 at The Orpheum will be filmed for a future DVD release.