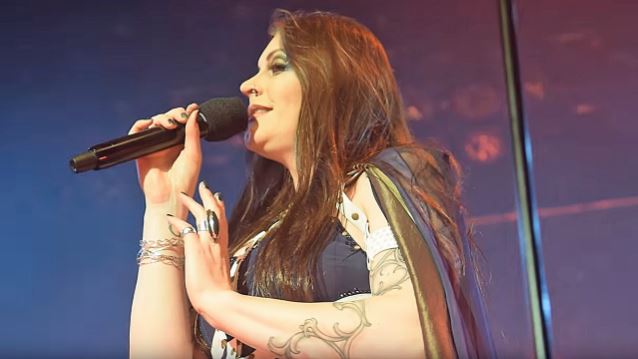 Tracy Heck of AXS conducted an interview with singer Floor Jansen of Finland-based symphonic metallers NIGHTWISH on February 26 at Royal Oak Music Theatre in Royal Oak, Michigan. You can now watch the chat below.

Speaking about NIGHTWISH's plans for the coming months, Floor said: "Well, the first thing that's gonna happen after this world tour is that we're gonna take a whole year off, which is something that in the twenty years of NIGHTWISH never happened."

She added: "Even though we will have this year off, it doesn't have anything to do with how things are in the band. I've seen some people starting to gossip online of why we [would] take a year off. We'll take a year off because we can and because we want to. That's all there is to it. It has nothing to do with how things are in the band. And it also doesn't mean that we haven't been thinking about what's coming next; we have a lot of cool stuff coming up. So we hope that, after this break, people will still be equally excited to come out and see whatever we've got cooking up in our kitchen for them."

Asked if NIGHTWISH's decision to take a year off is related to the fact that the band's tours might have been getting longer in recent years, Floor responded: "No, not really, 'cause the world tours are not longer or anything more than on previous runs. But if you think about it, twenty years without a break, that has way more to do with it than anyting else. And also 'cause, you know, we're a bunch of very creative people. As you can see, everybody in the band has been having side projects. So it's nice to take the time for that, or to take the time away. To keep things fresh, you sometimes need to take distance. I think it's very healthy — more healthy than bands that would just go, go, go, go, go and wear themselves out. But I only can see this in a very positive way. Neverheless, this [current] world tour will last for a fair amount of months. We have a lot of places that we're going to that we're looking forward to a lot. So it's not there yet. But until that time, we will rock your socks off. [Laughs]"