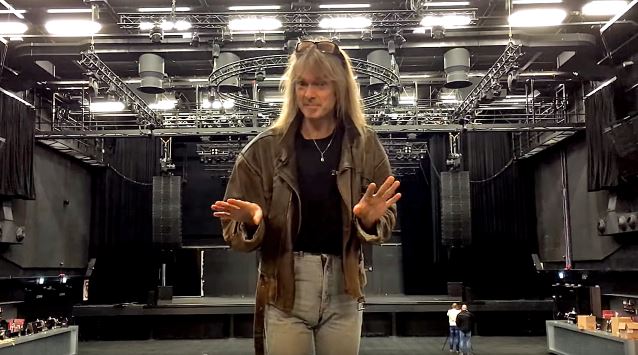 Ayreonauts take notice and mark September 15 and 16 of 2017 in your calendars! These are the days that you can experience AYREON live. AYREON mastermind Arjen Lucassen has chosen the best songs from the AYREON albums and "Star One" to create an exclusive live AYREON show: "Ayreon Universe". The show will be performed at the 013 venue in Tilburg by the very best original AYREON vocalists and instrumentalists. You can expect Floor Jansen and Marco Hietala from NIGHTWISH, Russell Allen (SYMPHONY X), Damian Wilson (TRESHOLD), Hansi Kürsch (BLIND GUARDIAN), Tommy Karevik (KAMELOT), Jonas Renkse (KATATONIA), Anneke Van Giersbergen (THE GENTLE STORM), and many other original AYREON singers on stage, as well as an appearance by Arjen Lucassen himself. Regular ticket sales start on Thursday, November 24 at 10.00 am CET via www.ayreon.com/universe. All subscribers to the Arjen Lucassen newsletter will get the chance to buy tickets 24 hours before the regular ticket sales start.

"After the huge success of the four sold-out AYREON theater shows in 2015, Joost and I decided to boldly go even bigger," says Arjen. "This is a full-on 'best of AYREON' rock show in a big venue with as many original AYREON singers and musicians as possible. We're calling it 'Ayreon Universe', and as you might guess, it's a huge undertaking. We've had an entire team working on it for over a year already. AYREON fans have high expectations, and we want to be sure to give them a once-in-a-lifetime experience that they'll never forget.”

There will be no less than 16 original AYREON singers:

"'Ayreon Universe' is bound to become one of the most unique live events ever in the symphonic and progressive rock/metal genre," says musical director Joost Van Den Broek. "We're combining a big selection of top vocalists and instrumentalists who have never been on one stage together before.

"The music of AYREON sets the bar really high, pushing everyone involved to their limits. In the upcoming months of preparation towards the shows, we will do everything possible to create a 'once-in-a-lifetime' experience and performance, living up to all the fans' expectations."

The "Ayreon Universe" live shows will feature songs from all AYREON albums (including from the upcoming release on Mascot Label Group), as well as a selection of fan favorites from "Star One".