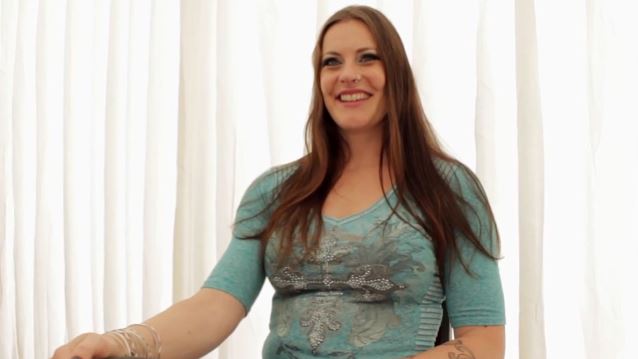 PlanetMosh conducted an interview with Dutch singer Floor Jansen (NIGHTWISH, REVAMP) at this year's edition of the Bloodstock Open Air festival, which was held August 7-10 at Catton Hall, Walton-On-Trent, West Midlands, United Kingdom. You can now listen to the chat using the audio player below.

Asked if there are any plans for REVAMP to begin work on a third album, Floor said that the follow-up to last year's "Wild Card" was "a long way off." She explained: "That is unfortunate for REVAMP, but I cannot do things at the same time, I realize that. So I cannot work on a REVAMP album when I tour with NIGHTWISH. And I cannot do any NIGHTWISH stuff when I'm touring with REVAMP. Things have to be [done] in periods. So the REVAMP period of one year has been there, and it will have to stop, because I've already started rehearsing for the new album with NIGHTWISH and we'll start recording pretty soon, and that will be my focus. I can maybe do little side projects here and there, if it doesn't take too much of my creative energy. But making a new album, of course, will [require a lot of my time and effort], and it would be nice to focus on that entirely. So we'll see what the future brings. I have not made any decisions of when and where, and neither did the rest of the band. I mean, we're six people and everyone has their time and schedules and maybe things will happen. But the success of REVAMP is clear. We've sold a lot of albums, we've done very good tours, and wherever we play, we get a very positive response, and that's something that would be very nice to keep…"

She added: "I'm very happy with what I can bring into NIGHTWISH, but I will probably want to keep on writing things. And that can take many forms as well."