"Dark Passion Play", the latest studio album from Finnish/Swedish symphonic metallers NIGHTWISH, has been certified platinum in Switzerland for sales in excess of 30,000 copies. Meanwhile, the band's "End Of An Era" DVD has achieved gold status in the country by shifting more than 3,000 units. The NIGHTWISH bandmembers were presented with the awards prior to their March 28, 2009 concert at St. Jakobshalle in Basel (see photo below).

The "End Of An Era" DVD, which was released in 2006, contains footage of the band's final performance with former singer Tarja Turunen, recorded in October 2005 in Helsinki, Finland.

"Made In Hong Kong (And In Various Other Places)", the new CD/DVD from NIGHTWISH, entered the German Media Control chart at position No. 15. It also opened at No. 2 in Finland and has dropped down to No. 5 in its second week of release.

Released on March 13 via Nuclear Blast Records, "Made In Hong Kong (And In Various Other Places)" contains a DVD documentary (with a running time of approximately 45 minutes) of NIGHTWISH's world tour in support of the band's latest album, "Dark Passion Play", as well as a CD featuring live recordings from the trek. The documentary footage was reportedly directed by Ville Lipiäinen.

An extended five-minute "Made In Hong Kong (And In Various Other Places)" preview clip can be viewed below.

NIGHTWISH issued a digital-only collection of demos and B-sides titled "The Sound of Nightwish Reborn", on September 2, 2008. This release, which clocks in at nearly 70 minutes of music, retains "must-have" status for all NIGHTWISH diehards, since it includes a bevy of exclusive material, such as demo versions of songs from the "Dark Passion Play" sessions that were recorded prior to singer Anette Olzon joining the band and that feature Marco Tapani Hietala handling the vocals, as well as B-sides. 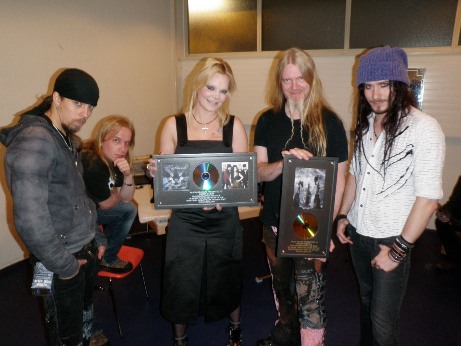