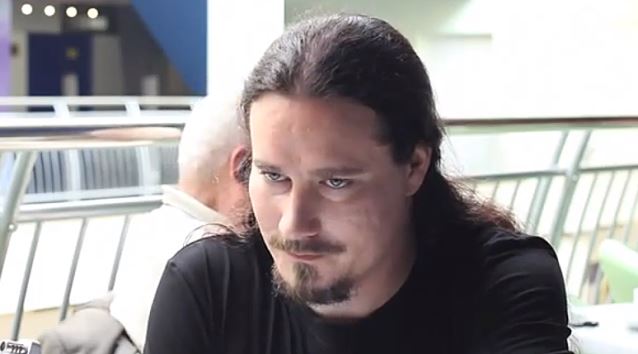 The official web site of the NIGHTWISH keyboardist and main songwriter Tuomas Holopainen has uploaded a 30-minute audio interview with Holopainen as the first installment of the site's "Campfire Sessions". You can now listen to the chat at this location. It is also available for streaming below.

NIGHTWISH's August 3 performance at the Wacken Open Air festival in Wacken, Germany was professionally filmed for a concert DVD and Blu-ray, tentatively due before the end of the year.

In a recent interview with Ghost Cult Magazine, former AFTER FOREVER frontwoman and current REVAMP singer Floor Jansen — who has been performing with NIGHTWISH since last October — was asked if she would be willing to front NIGHTWISH permanently if she were asked to fill the slot.

"I've been asked to fill in for the current world tour and for a couple of festival dates, but what will happen after that is still unclear," she replied. "NIGHTWISH will take a break after the current touring cycle and they'll make a decision next year. Until then, everything is still up in the air."

She continued: "If they would ask me, I would be very flattered and I would love to do it. It will be a major overhaul in my life and my career as a singer, but then again, we're not rushing things.

"Both the guys in NIGHTWISH and I have experiences with previous band breakups and all emotions that come with it. It's almost like dating. Things feel good and it's going well, but we're not in a rush to tie the knot, so to speak."

Regarding how she looks back on her experiences as a stand-in singer for NIGHTWISH so far, Jansen said: "It's still too early for me to really reflect on the whole NIGHTWISH adventure, because there are still a couple of tour dates pending, including some summer festivals.

"What can I say? It's an incredible ride and it feels really good. Things went really well from day one. The timing was really awkward, because Annette Olzon just left the band and there wasn't really time to rehearse with the other NIGHTWISH members. Anxiety levels were running high, because replacing a female singer mid-tour is a hazardous experience, to say the least. They were running the gauntlet to make sure that none of the remaining tour dates had to be canceled. They were scared and so was I.

"It doesn't matter where you perform, YouTube will be plastered with movies of the gig the next day, so I really gave it my all. Everyone in the band and crew were really supportive and all the positive reactions and the warm acceptance by the NIGHTWISH fanbase was beyond my wildest dreams.

"Some people would rather see someone else fronting the band, but you can't please everyone."

Regarding whether there is a chance that Floor will become the official new NIGHTWISH lead singer, Tuomas said: "The way that we have decided is that we're gonna continue with her until the end of the festival season in 2013 — just have fun, just do the shows the best we can. I mean, the atmosphere in the band is so good at the moment, [we want to] just enjoy this what we have right now. They try not to think about NIGHTWISH at all for a few months. Everybody take a little vacation. And we already have the rehearsal place for the next album booked in 2014 — from July to September. So that's how far we have planned. But when we do the last festival show next August, after that, it's gonna be total nothing for a few months. So I would say everything is possible, but that's really not the thing that we want to be thinking about right now, because there's absolutely no reason to."