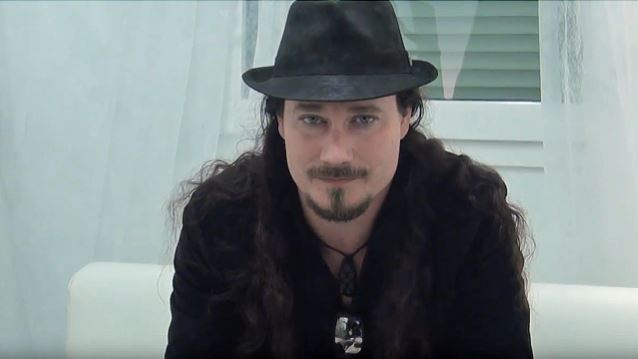 Kaaos TV conducted an interview with NIGHTWISH keyboardist and main songwriter Tuomas Holopainen prior to the band's June 30 concert at Provinssi in Seinäjoki, Finland. You can now watch the chat below. A couple of excerpts follow (transcribed by BLABBERMOUTH.NET).

On NIGHTWISH's upcoming 20th-anniversary show on August 20 at Himos Park in Jämsä, Finland:

Tuomas: "First of all, it's like an official anniversary show; it just happens to be almost to the month of twenty years after the birth of the band. But we're not promoting the show as the 20th anniversary of the band. But there will be a couple of little surprises there… Let's just wait and see. It's gonna be a good night."

On whether the Himos Park concert will be filmed for NIGHTWISH's upcoming DVD:

Tuomas: "It's not gonna be filmed for that, because it's a bit late. I mean, we're already in the final processes of editing the shows, doing the audio. The cover booklet is already in print, because the aim is to release the DVD before Christmas this year. So everything that's gonna be included on the DVD — I cannot reveal the specifics just yet — but everything has been filmed. And I was just doing the video editing yesterday all day, and it's looking pretty good."

On whether it will be difficult to stay away from working on new music during NIGHTWISH's planned year-long break in 2017:

Tuomas: "If the music comes, then it comes. I mean, if I feel like, 'Okay, let the songs come,' I don't mind… It's not like I don't want to do anything for a year. But just the idea that you don't have to do anything; I don't force it. And if comes to that, I can just stay at home and take care of the garden all year. Just the idea of that really gives to goosebumps, and that's what I'm looking forward to. But, of course, you have to keep your mind occupied somehow, so whether it's gardening, whether it's writing a book, doing crossword puzzles, whatever, there will be a lot going on. The idea is just to give myself and give the whole band a well-deserved breather for a year.

"It's a peculiar feeling, because throughout the twenty years [of NIGHTWISH's existence], I've never felt like this, that you really, really need to step away for a while. And it's not really fatigue — it's not like we're burning out or anything — it's just the inspiration or the passion of starting to do a new album, it's just not there. And we are fortunate enough to be in a position that we can actually take a year off, and that's a huge privilege for us. So we're just taking advantage of that."

NIGHTWISH released a strictly limited special tour edition of its current album, "Endless Forms Most Beautiful". The tour edition came with a bonus DVD of live performances, documentary footage and promo videos as well as a huge photo gallery.

NIGHTWISH's most recent headlining tour of North America launched on February 19 in Sayreville, New Jersey and closed out in Tampa, Florida on March 23. Support on the trek came from Dutch symphonic metallers DELAIN and Finnish melodic metallers SONATA ARCTICA.