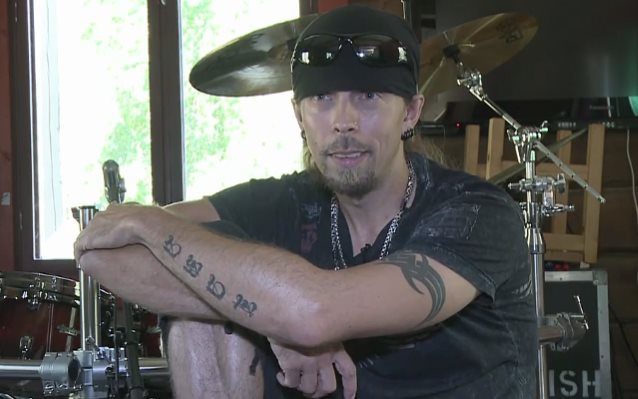 Jukka Nevalainen will take a break from his duties as the drummer for the Finland-based symphonic metal band NIGHTWISH in order to deal with his health issues.

Nevalainen has released the following statement regarding his decision to step aside during the recording sessions for NIGHTWISH's forthcoming album:

"How to begin telling something that you wouldn't want to have to tell, although you know that the decision you made is the only (at least the only right) one you could make at the moment? I face this dilemma now, and will do my best to find the right words.

"For a number of years, I have suffered from occasional but very difficult insomnia, something that has been my unwanted companion during many of our tours, too. I've done my best to try to control it or at least to cope with it. Still, we don't even really know why we need sleep, so unfortunately there's not much information available on why some of us suffer from sleeplessness. There is no 100% cure for the problem.

"During the last month, it has become evident for me that due to my insomnia, I can't fulfill my duties as a musician in the way that I'd want and with the precision that the music deserves. Thus I have decided to step aside from my duties as the drummer of NIGHTWISH during the recording of the forthcoming album and the subsequent tour. I will still be involved in managing the day-to-day affairs of the band, but the dearest and the most important thing, playing, is, for the time being, not possible. Time will tell what the future holds.

"On a personal level, my decision obviously feels indescribably sad. Fortunately, looking at it with some distance, it is 'just' part of the constant, inevitable ebb and flow of life. The sad things are part of it as well as the beautiful, unforgettable experiences and adventures that I've already had the pleasure to experience in spades. Surely, there will still be many adventures ahead, too.

"My good friend Kai Hahto [WINTERSUN] will play drums on the forthcoming album. I'm extremely grateful that he didn't hesitate for a minute when he decided to help us in this challenging situation. What comes to touring, everything is still open, but we will let you know as soon possible what the lineup will be.

"If beginning this was hard, so is ending it. So maybe I will just quote something fitting.

Nevalainen's videotaped statement can be seen below.

NIGHTWISH recently inked a North American deal with Nuclear Blast Entertainment. Due in early 2015, the band's as-yet-untitled eighth studio album will be the first to feature Dutch vocalist Floor Jansen (REVAMP, ex-AFTER FOREVER), who has toured with NIGHTWISH since October 2012.

NIGHTWISH has been signed to Nuclear Blast for the European territory since the release of the band's 2004 album, "Once".