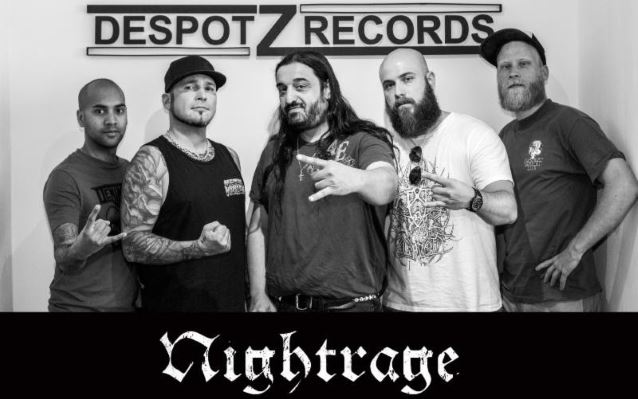 Greek/Swedish melodic death metallers NIGHTRAGE have signed a record/publishing deal with Swedish music company Despotz. The band's sixth studio album will surface in February 2015, with a new video/single to be unleashed this fall.

"Today we are proud to announce that we have signed an album deal with Despotz Records," commented Marios Iliopoulos of NIGHTRAGE. "We are super excited to work with such a dedicated bunch of people, and we are entering studio Dugout Productions with Daniel Bergstrand on September 15. We would like to take this opportunity to now officially introduce Ronnie Nyman [ENEMY IS US] as our 'new' vocalist."

"Dreams can really come true, NIGHTRAGE is a living proof of that," added Ömer Akay, Despotz co-founder and partner. "I'm honored to be working with Marios and NIGHTRAGE; we truly have the same background and visions to take the band to the mainstream."

NIGHTRAGE was founded in 2000 in Greece by Iliopoulos and his close friend Gus G. (FIREWIND, OZZY OSBOURNE, ARCH ENEMY). Heavily influenced by the Gothenburg metal scene, the band relocated to Sweden to accomplish its dreams.

During NIGHTRAGE's career, various musicians from AT THE GATES, EVERGREY, DARK TRANQUILITY, AMARANTHE and FIREWIND have lent their services. In its 14 years, NIGHTRAGE has released five studio albums and toured across Europe, the U.S., Canada and Asia.