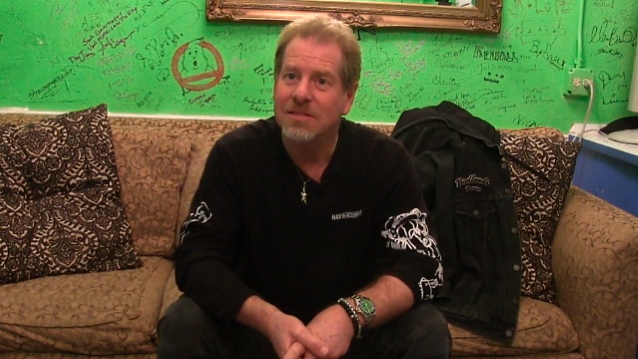 Prior to NIGHT RANGER's February 7 performance in Chicago, Illinois, guitarist Brad Gillis spoke with MusiciansChannel.com. The full conversation be seen below. A few excerpts follow (as transcribed by BLABBERMOUTH.NET).

On the band's upcoming tour with Sammy Hagar's THE CIRCLE and WHITESNAKE:

Brad: "It's a reunion with everybody. Reb [Beach, WHITESNAKE guitarist] was with NIGHT RANGER for about a year, and Joel [Hoekstra, WHITESNAKE guitarist] was with us for seven [or] eight years. Now, of course, we've got Keri Kelli, and Reb and Joel [are] in WHITESNAKE. Everybody knows everybody in this business. What's great is that back in the day, in the early '80s, Sammy took us under his wing for the 'Take It To The People' tour. We did, like, 13 shows, and that's we just kind of started breaking out of the box. [Legendary San Francisco promoter] Bill Graham was behind us, and ever since then, we've been joining Sammy on shows here and there. We just did two or three weeks with him this last year, and now we get 40 [shows]."

Brad: "Vic [Johnson, guitarist] is such a great player. Nicest guy in the world, but such a great band. A fun band. They all have such a good time, and boy, those guys still like to drink. We'll see how they are this run, but Sammy had a new tequila out [on last year's tour], and everybody was kind of dipping into that. Wow. I can't personally do a couple shots of tequila and play onstage without getting too happy, but sometimes we do one."

On whether he expected NIGHT RANGER to have such longevity:

Brad: "No. I would think I'd be doing it, but maybe not with the same band, because bands come in and out – they have their heyday, everybody wants to branch off and do their solo things, some of them make it, and some of them don't. Then L.A., the whole scene crashed when NIRVANA came out in the early '90s. All the guitar players from L.A. were all moving to Nashville to go country, and the whole shift of everything going on, but we weathered the storm... We've been killing it ever since."

Brad: "We kind of make sure we're both on our game – the good warm-up before the show, going over harmonies and making sure that everything's tits for the show. Keri's great. He's got a great attitude, great personality. Always up — I've never seen him bummed out. He weathers any storm that hits him. What was so cool was a couple years ago, we were doing soundcheck and he mastered every one of the original Jeff Watson licks, but one thing he didn't master was the eight-finger technique. We had a couple weeks off, and we were doing soundcheck [before] playing that night, and I said, 'Keri, how cool would that be if you were to learn the eight-finger technique,' and I kind of smiled. 'Okay, brother. I'll get on that.' I thought, 'Yeah, okay.' Two weeks later, we get together doing soundcheck for the next gig after our break, and he looks at me with a big smile and says, 'Come on, let's do '[You Can Still] Rock In America'.' I thought, 'He learned the solo.' He went up there and did the whole thing, man. [Now] he does it every night. Everything you're hearing, between Jack [Blades] and Kelly's [Keagy] lead vocals and the lead solos, everything's pretty much true to form when we play live. And we love playing live — we're still putting out 110 percent."

On his in-the-works solo album:

Brad: "I finished a couple more lead vocals with Gary Moon — great singer; low, girthy voice... I've been taking my time because we've been touring. I've been remixing and getting things together, and I have one more tune that I just finished that's definitely viable for the record... Right now, I'm 90 percent done. We've got a couple weeks off [soon], and I'll try to finish everything then and start coming up with a game plan for the record company and how to get it out there. It's a whole new world with digital. I've really got to be smart in how to do it and not throw out a record and just get it tossed over the shoulder. I want people to hear it."

Brad: "We just got a new record deal, so we're going to start recording ideas and jamming real soon. We're talking 2021 for that, and then of course, the 40-plus with Sammy and WHITESNAKE. We got an offer to go to Europe opening for GUNS N' ROSES at the Sweden Rock Festival. They want us, so I think we're going to take that... It's going to be a good year."

NIGHT RANGER's most recent studio album, "Don't Look Back", was released in 2017 via Frontiers Music Srl. The group's summer tour with THE CIRCLE and WHITESNAKE kicks off on July 9 in West Palm Beach, Florida.