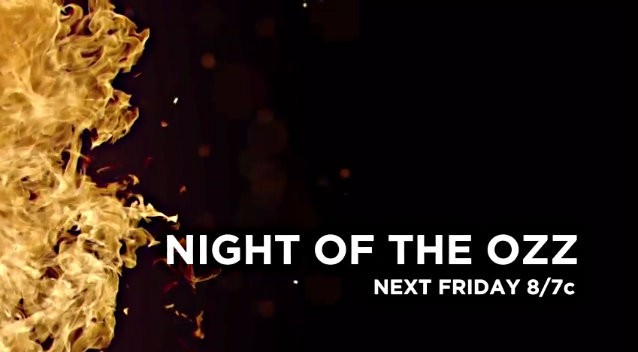 The Palladia channel will air the "God Bless Ozzy Osbourne" documentary at 8 p.m. and the BLACK SABBATH "Gathered In Their Masses" concert DVD at 10 p.m. next Friday, October 10.

A 40-second commercial for "Night Of The Ozz" can be seen below.

"God Bless Ozzy Osbourne", the feature-length documentary about the life of the legendary heavy metal singer that Ozzy Osbourne's son, Jack Osbourne, co-produced, was released on DVD and Blu-ray in November 2011 via Eagle Rock Entertainment. During the documentary, Ozzy recounts his troubled youth, his early career with BLACK SABBATH and the impact of fame and addictions on his first marriage. Viewers also witness the second chapter of his life as a family man with Sharon, during which his addictions grew to a frightening level, as well as hear Ozzy and his children explain his attempts at staying clean, ultimately resulting in more than five years of sobriety. Music fans also see live performances from around the world, including rare behind-the-scenes clips of Ozzy on and off stage, in his dressing rooms pre-show, to his nights in a series of hotel rooms. Throughout "God Bless Ozzy Osbourne", audiences are given an inside look into the life of a rock star, from the good times to the bad.

"Black Sabbath: Live… Gathered In Their Masses" sold around 9,000 copies in the United States in its first week of release to debut at position No. 2 on the Top Music Videos chart. Released on November 26, 2013, the set was recorded April 29 and May 1, 2013 in Melbourne, Australia when the band kicked off its world tour in support of "13".