Swedish cult metallers NIFELHEIM have scheduled a one-off concert in the U.S. on September 7 at the Double Door in Chicago, Illinois. Support at the show will come from THE CHASM and SUPERCHRIST.

Video footage of NIFELHEIM performing at the Metaltown festival on June 27, 2008 in Gothenburg, Sweden can be viewed below.

NIFELHEIM released its new album, "Envoy of Lucifer", on November 19, 2007 via Regain Records.

NIFELHEIM in 2006 released a split EP with VULCANO via I Hate Records. NIFELHEIM's songs "Sepulcral Fornication" and "Raging Flames" were recorded at a Swedish studio in May 2006 and were described by NIFELHEIM guitarist Vengeance From Beyond (a.k.a. Sebastian Ramstedt; also in NECROPHOBIC) as "a total attack of satanic black metal." He added that "this split [is] the true synergy of evil." 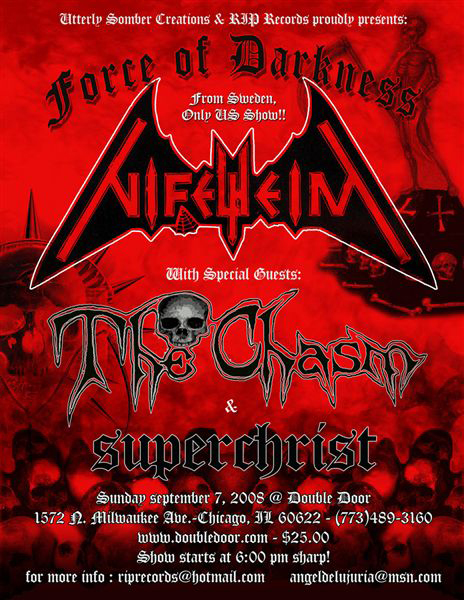