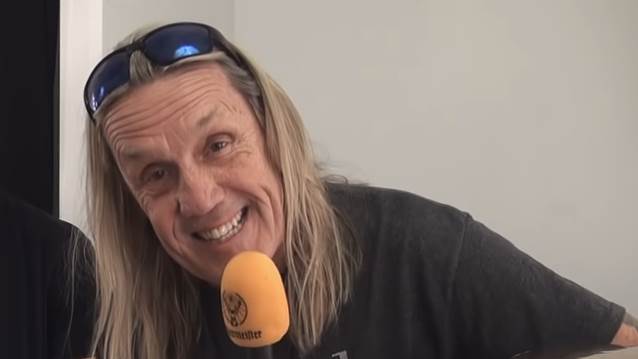 Finland's Kaaos TV conducted an interview with drummer Nicko McBrain of British heavy metal legends IRON MAIDEN prior to the band's May 28 concert at Hartwall Arena in Helsinki, Finland. You can watch the entire chat below. A few excerpts follow (transcribed by BLABBERMOUTH.NET).

On the band's current "Legacy Of The Beast" tour:

Nicko: "We've got a lot of production, more so than we normally have. When I say 'production,' I mean lots of effects, lots of special staging, which is basically the realms [of the 'Legacy Of The Beast' video game]. What we did was we leant the 'Legacy Of The Beast' game — this isn't to promote the game. We thought 'Let's just go back out.' We just did the 'Book Of Souls' album and tour last year; obviously, the album was released in 2015. Having said that, we thought, we want to go out and do another summer tour. I think Bruce [Dickinson, vocals] and Rod [Smallwood, MAIDEN manager] came up with the idea, 'Let's go with some of the different realms that are within the 'Legacy Of The Beast' game.' That, of course, lends itself to a lot of the older music, older material. Some of the stuff we haven't played…let me see: 'Flight Of Icarus', that hasn't had an airing in gosh knows how long [32 years]. 'Sign Of The Cross', 2001. There's a lot of stuff that's been over a decade since we played live. We dusted down some of the old songs and we fit the production in with these three different realms which are within the game, 'Legacy Of The Beast'. Of course, you've got all of the Eddies. There's a lot of Eddies going on there. There's a lot of fireworks, a lot of wonderful effects. Bruce has staged some wonderful theatrics. But, for us, as a band, it gives us an opportunity to play some of the older stuff we haven't played in a long time."

On how he stays in shape to play drums:

Nicko: "My regime, if you like, my schedule, about a month prior to going on and starting rehearsals — we started rehearsals three-and-a-half, four weeks ago. The four weeks, back in America, I managed to get for the last two and a half weeks, I've got my 'Book Of Souls' drum set delivered to my home in Florida. Before, I was playing on a five-piece drum set. It's not the same. It's just not the same as playing an 11-piece kit with all of your cymbals because there's a different way — I still sit the same height. I'll go and run the set. I'll learn the songs, like the older songs we haven't played in a while. I'll listen to the live versions, but they're all too quick. [Laughs] I wonder why! They were a lot quicker than the album versions, so I actually went back and listened between the two, then what I'd do, I found a happy medium where I would clock the timings of the intros and the middle section, say for 'Sign Of The Cross'. 'Sign Of The Cross' is one of those songs that has to have a life of its own. [Mimics drumbeat] before the solos, if we go too quick there, the solos are too fast. There's no actual meter between one section to the other. They're all sort of moody, so it's just kind of re-learning through the live and the album version because the album version, actually [mimics drumbeat again], it's really quick. So, I sit down and try to work it out. It's about four weeks of going through the songs, then I'll play a little bit. I have to get this hand working [holds left hand]. I've got a pulled ligament in my wrist, which I got two years when we started the last tour. So, I can't just like I was when I was younger go out cold. I have to warm myself up because I am an old git. Your body starts changing, but the thing is with MAIDEN, we all still really, really have a passion to play live."

Nicko: "We got to get through this tour yet. [Laughs] We got a lot of life left in us. We've not ever, that I can recall, unless anyone else in the band has without a band gathering, decided whether or not we want to carry on or not. We just carry on. I've always made it clear to Steve [Harris, bass] and the guys that if I can't drive the band physically, then I'd step down. Don't get me wrong, boys and girls — I'm not saying that I am. It's so important that the band carries on and plays as much as we want because we have the passion. Again, it's not financial, it's not anything to do with that, it's because we love it. If it came as a chore and I'll quote Jan [Gers, guitar], if we ever became a parody of ourselves, that would be the time to hang it up. The thing is, we're not. I'm the granddaddy in the band. I'm the oldest fellow in the band which is quite unusual because every band I was in before MAIDEN, I was always the youngest or the second youngest. Now, I'm the wise old man of the band! They won't agree with the 'wise,' just the 'old.' We'll carry on as long as our fans, which are the most loyal and I'm telling you right now, without a doubt, I compare it to 'Arnie's Army', the golfer Arnold Palmer. He started a fanbase back in the '60s. He had this massive following and they called it 'Arnie's Army'. They were the most loyal fans to a golfer. Every band says their fans are the best and I love that their bands do respect it, but I truly mean it and I know we have the best fans in the world. We do not make you guys happy, then what's the point? Although we do it for ourselves, but at the end of the day, we could go up there and think we're Jack The Lad and you could go, 'What was that all about?' Nick's playing in a different time. He's in a different song. Bruce is singing out of time!' When it's not that fantastic vibe that we get when we play together — we'll carry on as you want us to and the fans and as long as we have the heart to and believe me, there's actually more passion the more we get older than I think we had when we had when we were in the mid-'80s in the first heyday of MAIDEN."

MAIDEN kicked off the "Legacy Of The Beast" world tour on May 26 in Tallinn, Estonia.

The concert in front of a 10,500-capacity crowd at Saku Suurhall saw the band open with "Aces High" (complete with a Spitfire war plane replica suspended over the musicians), which hadn't been performed since 2014, and continue with "Where Eagles Dare", which was played for the first time in 13 years.

Other surprises during the set included the Blaze Bayley-era classics "The Clansman" and "Sign Of The Cross", which received their first airings since 2003 and 2001, respectively, as well as three additional tracks that hadn't been performed in years: "For The Greater Good Of God", "The Wicker Man" and "Flight Of Icarus".