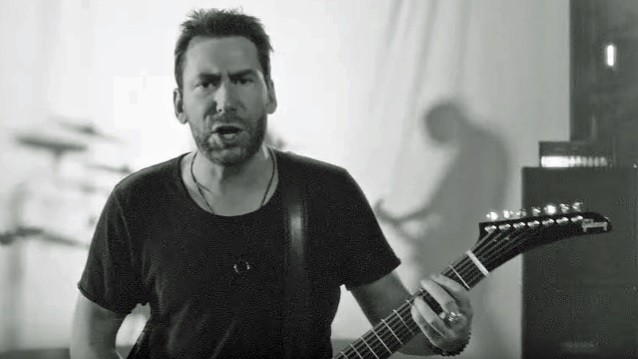 NICKELBACK's music video for the song "The Betrayal (Act III)" can be seen below. The track is taken from the band's ninth album, "Feed The Machine", which was released in June via BMG.

NICKELBACK leader Chad Kroeger told Music Choice about "Feed The Machine": "This album is definitely heavier, as a whole, than a lot of our previous records. We've gone back to some pretty crunchy roots, and we're happy about that. I mean, we're always stretching off in different directions and trying different things, but we definitely went with more of an aggressive sound on this record."

Kroeger called "The Betrayal (Act III)" "probably one of the hardest and heaviest songs we've ever put out… It is quite heavy; there's a lot of screaming that goes on in that chorus," he said. "I think we've all tasted a little betrayal in our days and it is not a flavor that I think any of us liked to swallow."

As previously reported, NICKELBACK will return to Sin City in February 2018 for an impressive five-night run at The Joint at Hard Rock Hotel & Casino. MONSTER TRUCK will open all five shows. The limited run is made even more special with the announcement that these shows will be NICKELBACK's only North American dates scheduled in 2018.

Following its Vegas run, NICKELBACK will embark on the international leg of the "Feed The Machine" tour throughout the remainder of 2018.