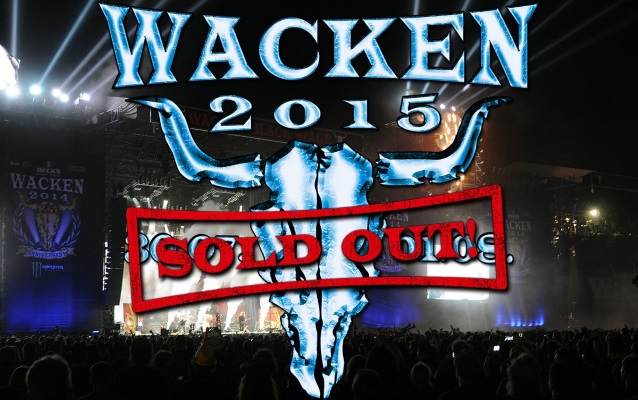 The 25th-anniversary edition of Wacken Open Air just ended 36 hours ago and the promoters are already able to confirm that next year's installment of the annual metal festival has sold out. It is the 10th year in a row that all tickets to Wacken have been snapped up. Within 12 hours, 75,000 tickets to the 26th Wacken Open Air were sold.

This marks the fastest sellout in Wacken's history and it beats the previous record, which was set last year.

"We are absolutely overwhelmed," said Thomas Jensen, one of the Wacken promoters. "Last year we were sold out in 48 hours. Now it only took 12 hours.

"We would like to thank all our fans for their amazing support and loyalty."

Described as "the biggest heavy metal festival in the world," this year's Wacken Open Air featured performances by over 100 acts, including MOTÖRHEAD, SLAYER, KING DIAMOND and MEGADETH.

The first Wacken Open Air event in 1990 drew less than 800 people, but it has since grown to become the biggest open-air festival of its kind.

Around 30 percent travel from other countries to the festival, which over recent years has been growing in popularity.

"Wacken 3D", a new feature documentary shot between July and August last year in stereoscopic 3D, gives audiences a chance to experience the festival in a most intimate way: the fans, the music and the unique atmosphere.

"I think this really is — I wouldn't say divine intervention — but to have this film out now, on the 25th anniversary of the festival, is, of course, a very lucky coincidence," Jensen told Euronews. "It feels right. It's great to have a movie that talks about what these 25 years mean to us."

Wacken Open Air was the subject of the 2006 award-winning documentary "Full Metal Village" from Korean-born, Germany-based director Sung Hyung Cho, who looked at the sharp contrasts and strange connections between sleepy village life in Wacken and the annual long weekend of heavy metal madness.

A trailer for the festival can be seen below.