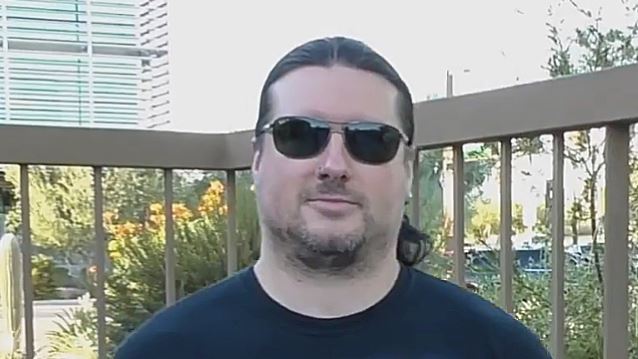 Adam Messler of Soundwave Brigade recently conducted an interview with TRIVIUM guitarist Corey Beaulieu. You can now watch the chat below. A couple of excerpts follow (transcribed by BLABBERMOUTH.NET).

Corey: "I was a fan of the band before they got signed. Living in the area [of Florida], I saw them as a local band. I bought the 'famous' blue demo ['Trivium'] that everyone talks about. I was one of the first people who bought a copy of it. I remember Matt [Heafy, guitars/vocals] opening the box when they got the demos. Besides his parents, I was probably one of the first people to buy the damn thing. I still got a copy somewhere. [TRIVIUM's 2003 debut] 'Ember To Inferno' is out of print. The demo has been out of print for ten years, but I think sometime later this year the whole big reissue package with 'Ember' and all of the demos that preceded the album [will be out]. It will be a cool little setup. Matt's been working on it. He was there for that, so he's in charge of getting it together. It looks pretty rad so far."

On the band's newest album, "Silence In The Snow":

Corey: "It's reached a lot of new fans and it's cool to see everything still growing and reaching new people. We're really happy with how the record turned out. It's exactly what we wanted to make. No complaints here. Just having fun going out on the road playing all of our songs."

On when the band will release the follow-up to "Silence In The Snow":

Corey: "It depends on the whole tour process. We're always working on new music. We've been writing even before 'Silence' came out; ideas are always popping up. By the time we get done touring, we've already got the jist of what we're going to go into the studio with. We have a lot of material. There's no shortage of that. Now it's working out scheduling with producers, studios, the whole timeline of pre-production and songwriting. We should be able to get into rehearsal space to jam everything and get it to where it sounds like a bunch of songs. Hopefully once we have a better idea of that, then we'll know when realistically the next record might come out. Definitely sometime next year, but I don't know exactly when it will come out. But it will come out next year. Any time before December [2017] it will be out."

"Silence In The Snow" was released in October 2015 via Roadrunner. The follow-up to 2013's "Vengeance Falls" was produced by Michael "Elvis" Baskette (SLASH, ALTER BRIDGE, THE AMITY AFFLICTION) and was mixed by Josh Wilbur (GOJIRA, LAMB OF GOD).