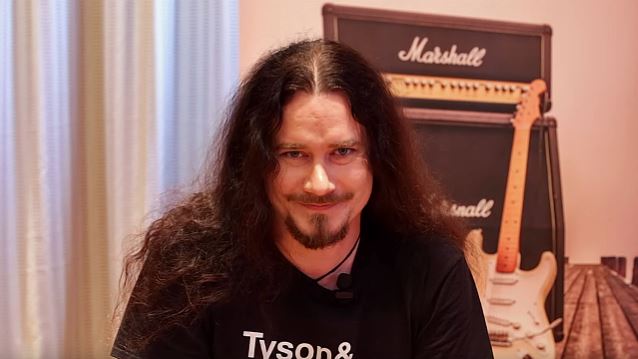 On December 8, 2015, GuitarMania.eu conducted an interview with Tuomas Holopainen of Finland-based symphonic metallers NIGHTWISH in Vienna, Austria. You can now watch the chat below. A couple of excerpts follow (transcribed by BLABBERMOUTH.NET).

On the songwriting process in NIGHTWISH:

Tuomas: "The way it works in NIGHTWISH is that I am very much a solo worker. So I try to make all the songs — even the arrangements — as ready as possible, as much as I feel that I have to give to the songs. Most of the riffs, even some drum fills and stuff like this. I just try to make it as good as I can do it by myself. And then I introduce the songs and demos that I've done on my own to the other members of the band, and then we start the rearranging process. You know, 'Could you come up with a better riff for this one?' 'Would the bass line be different in that one?' 'What about if the vocal line is like this?' And sometimes the songs change a lot — like song 'Nemo', for example, changed a lot during the arrangement process. And sometimes they are almost to the drum fill as they were on the original demo. So that's the way it goes for us. When it comes to guitars, I try to come up with riffs on my own — like the 'Scaretale' riffs are all mine, for example. But then again, in a song like 'Nemo' again, and 'Alpenglow', on the new album, it's all Emppu [Vuorinen, NIGHTWISH guitarist]. [He would say to me], 'That's okay, but it could be more interesting if I did this.' [And then I say], 'Yeah, that's excellent. Do it like that.'"

On much influence the other members of NIGHTWISH have during the songwriting process:

Tuomas: "Whenever they feel like that could be better; it's as simple as that. Same with Floor [Jansen, vocals]. 'I mean, this vocal line is really nice, but how about I do this little thing here, a little note there.' 'Oh, yeah, that's perfect.' Or on the new album [2015's 'Endless Forms Most Beautiful'], the song 'My Walden', the structure of it was pretty different originally, and it was actually Troy [Donockle] who came up with the idea of kind of, like, putting this there and that there and the tempo change there, and it really works. But sometimes everybody seems to be really happy with what I had in mind originally, and then we stick with that."

On NIGHTWISH's plans to celebrate the band's 20th anniversary in 2016:

Tuomas: "Well, not really. I mean, there's not gonna be a special 20th-anniversary show. We're saving that for the 25th or 30th or, hopefully, 50th year. Who knows? But no, there's not gonna be any bigger celebration. By accident, it was actually revealed that we have this show in Finland at Himos [Festival Park in Jämsä] on August the 20th, I think it was. It's one of the two shows that we have in Finland. And that's almost to the week twenty years from the date that NIGHTWISH was born. I remember it was August 1996, but I can't remember the exact date. So, in a way, you can call that show unofficial 20th-anniversary show."

On NIGHTWISH's plans to record and release a new studio album:

Tuomas: "It's gonna take a bit of time. 'Endless Forms Most Beautiful' was quite the effort, and this tour's gonna be quite the effort. And I think we're gonna take a little breather after this tour. And let's see. But, I mean, I haven't really had the spark for even thinking about another album in the past few months; it's been all about touring and other things. So it's gonna happen at some point, but it's gonna take some years, I think."