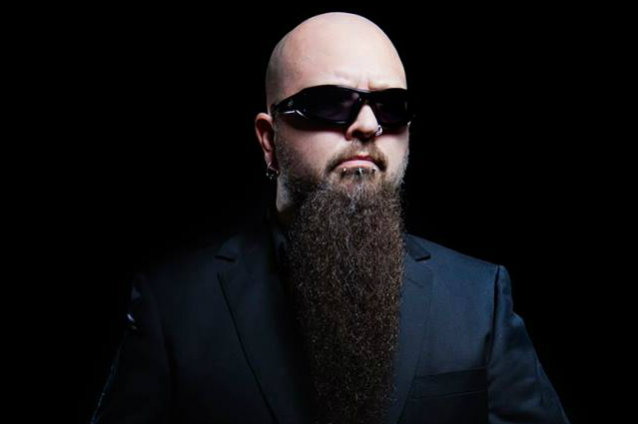 GigView.be: 2017 is the comeback of DIMMU BORGIR. Next to the DVD ["Forces Of The Northern Night", [there is] also a new album planned for this year?

Silenoz: "That's what we're aiming at, yeah. [It will be out] end of summer or fall, if everything goes as planned, I estimate that, but I can't promise anything."

GigView.be: Can we expect the same DIMMU BORGIR? Or will you for instance incorporate new instruments or a new sound?

Silenoz: "There will be some surprises, I'm sure. There's going to be more of everything in many ways. It's hard to describe at the moment, because we are in the middle of the process, so to speak. But I don't think any fan of DIMMU past and present will have anything to complain about. Of course, there are some people that are going to complain, but they will complain no matter what, they already made up their mind five months before the album comes out. [Laughs]"

GigView.be: Also orchestra on that album?

Silenoz: "Well, yeah, we have not utilized a live orchestra but we have orchestral sounds and samples that are played by an orchestra. I think it's going to be hard for most people to hear the difference. We still have the same choir that we used in [for the DVD recordings] Wacken and in Oslo, and now on the new album."

GigView.be: Are you already in the process of recording new songs?

Silenoz: "Yeah, it's pretty much done, basically. It feels quite an accomplishment. [We're] almost finished now."

GigView.be: Did it go different compared to other albums or more or less the same way?

Silenoz: "Well, more or less; I guess we are just as symphonic or even more as we are black metal. But we also are more black metal, more primitive, more brutal. You have all the extremes within the DIMMU reality on this album."

GigView.be: Where did the recording process take place?

Silenoz: "We went back to Sweden, with [producer] Jens Bogren in Fascination Street Studios. It felt like we wanted to try something new from scratch, try and develop a more organic, natural-sounding record, because we feel the material that we made [calls for] that type of dynamic recording, and that's what I feel what we have accomplished. I can't wait for us to share it with people."

GigView.be: There are a lot of bands lately that hire Jens. How did you get to know him?

Silenoz: "We didn't know him from before at all; it was just a feeling we had, and, as you say, he's really popular these days, he has a lot of work laid out for him. But we managed to get the timeslot that we needed. Everything has been working out really well, probably better than expected."

GigView.be: Do you already have a title?

Silenoz: "Actually, that's like last time, that's the last thing that we are processing at the moment. But I think we are really close."

GigView.be: Can you tell how many songs you have on the new album?

Silenoz: "We have ten songs, take it or leave it. We didn't record anything that we feel is of lower value. We always give it our 100%, so recording a song that is only of 90% quality, that's not done for us. That's why we also don't have any bonus tracks. Regarding that, we'll have to think on how to distribute the album and all kind of marketing."

GigView.be: Any idea when we can expect the first single?

Silenoz: "That's too early to say. Hopefully this summer, let's see how it goes if all goes well. We don't know yet which song we'll bring out as a single or whatever you want to call it. We still have to discuss that. There are still many things to do."

Read the entire interview at GigView.be.