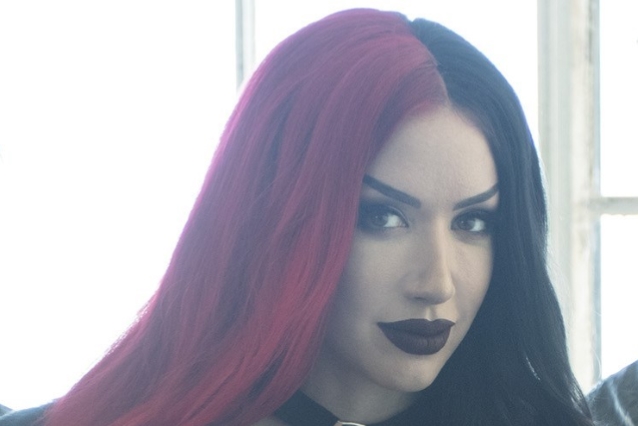 NEW YEARS DAY vocalist Ash Costello has opened up about suffering a miscarriage while recording the band's 2015 album "Malevolence". Speaking to Alternative Press, Costello described the album as "the worst, darkest, nastiest place I could ever imagine in my life. Rock bottom. The songs are not happy, and there’s not a lot of hope going on in that album."

She explained: "I had just found out I'd been cheated on a bunch by the person I was with in pretty horrible ways. And during the making of 'Malevolence', I lost a child. I had a miscarriage in the two weeks after I found out I had been cheated on.

She continued: "No one really knows that, but it's something I want to talk about because I've done my healing on it. If you had asked me a couple of years ago, there's no way I would have ever talked about that. But I've done all my inner work, and I've danced with my shadow self, and now I can live with my lighter self, and I'm really proud of that, because that's what I want people to take away from this record."

Costello then compared "Malevolence" to the band's latest album, "Unbreakable", saying: "Go back and listen to 'Malevolence' and what I went through. 'Unbreakable' is so much more like, 'I survived! I fucking did it!'"

She explained: "A lot of people would give up. I somehow made it through, and it turns out, I am unbreakable. It was severe loss. I saw no light at the end of the tunnel. I saw nothing at all, nothing to look forward to, nothing to keep me going. And then I found the light by simply getting up every day still. And even though that day would suck and I'd spend the majority of it crying, I lived every day. That was it: just keep going. Keep trying. I wish I didn't remember that time so vividly, but I do. I remember thinking, 'Just keep going. Today sucked. Tomorrow's going to suck, too. Just wake up.'"

NEW YEARS DAY's fourth studio album, "Unbreakable", was released on April 26 via RED Music. The disc was produced by Mitchell Marlow (ALL THAT REMAINS, IN THIS MOMENT, BUTCHER BABIES) and Scott Stevens (AMERICAN AUTHORS, HALESTORM, SHINEDOWN).

NEW YEARS DAY is currently on the road with FALLING IN REVERSE. The U.S. trek kicked off in Las Vegas on April 20 and will wrap on May 24 in Los Angeles.