With the first decade of NEW YEARS DAY, rock music's breakout band, wrapping up, singer Ash Costello and co. are excited to announce the release of their first box set, "Through The Years". The limited-edition set features all seven of NEW YEARS DAY's albums available for the first time on custom colored vinyl, a Blu-ray of their beloved music videos and a four-page picture book of never-before-seen photos of Ash and NEW YEARS DAY from their humble beginnings. The photos were handpicked and the captions were hand written by Costello. Limited to 500 copies, the box set can be pre-ordered here.

Costello states: "I recorded NEW YEARS DAY's first album, 'My Dear', in my friend's bedroom closet in 2005, nearly 15 years ago. From then till now, every song recorded has been like a ripped page from that day in my personal life's journal. It's exciting to see it all together now, like a map of our band's career. I hope everyone enjoys being able to own the entire journey, and I hope it inspires the listeners to never give up on their dream."

"Through The Years" is a six-pound box, with seven custom-colored LPs, Blu-ray and a four-page picture book. It retails for $125.98. This is a must for anyone who has been a fan of NEW YEARS DAY since the beginning.

2020 launches the band into the second decade of its incredible career so it is only fitting for a band named NEW YEARS DAY to launch their box set not only in the New Year, but a new decade.

Ash and co. are currently on tour in Europe supporting HALESTORM and IN THIS MOMENT. Their new single, "Come For Me", is celebrating nine weeks on the Active Rock chart.

NEW YEARS DAY's latest full-length album, "Unbreakable", came out in April. The band's fourth studio album was produced by Mitchell Marlow (ALL THAT REMAINS, IN THIS MOMENT) and Scott Stevens (HALESTORM, SHINEDOWN). It is the follow-up to the band's 2015 LP, "Malevolence", which hit No. 45 on the Billboard 200, thanks to the radio hits "Defame Me" and "Kill Or Be Killed". 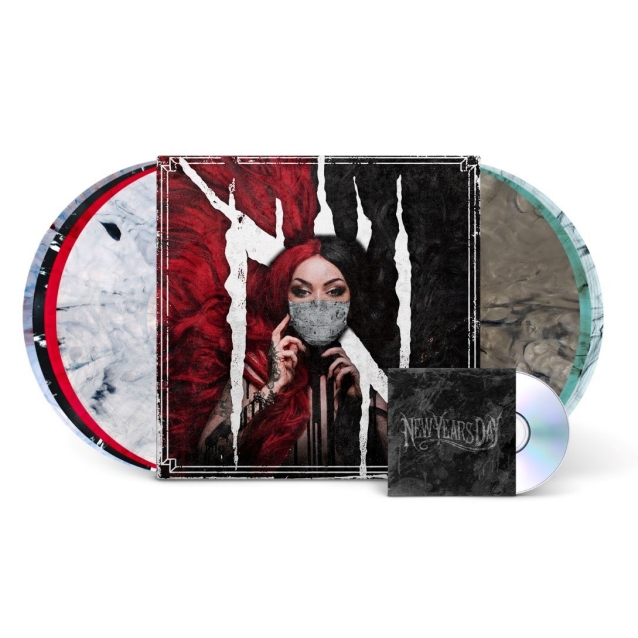