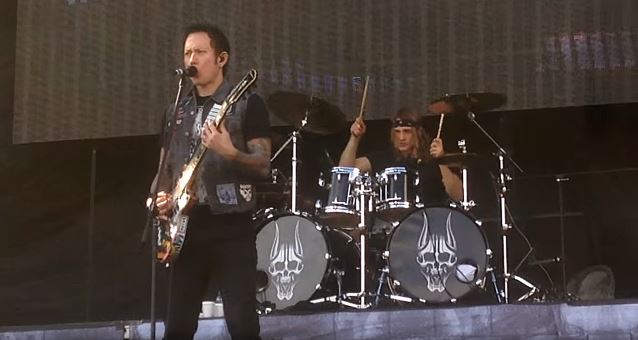 Florida metallers TRIVIUM have commented on their split with drummer Mat Madiro and addition of Paul Wandtke.

Wandtke, who previously drummed for the hit musical "Rock Of Ages" and sat behind the kit for KILL HANNAH during the band's main-support run with the SMASHING PUMPKINS, made his live debut with TRIVIUM at this past weekend's Knotfest in Mexico.

In a statement posted on TRIVIUM's Facebook page, the band says: "We are writing this to let you all know that TRIVIUM has amicably parted ways with Mat Madiro as our drummer.

"Mat stepped up for us at a dire moment where it was either leave a tour, or carry on. With Mat, we will forever be eternally grateful of everything he helped us out with. Mat's time filling in for us was much appreciated. Creatively though, we felt at this time we needed to make a change. And every change, every difficult decision and every evolution that TRIVIUM has either decided, or been forced to make has been for the necessary for us to continue on as a functioning band.

"The things that go on behind the scenes that directly involve the TRIVIUM members aren't always apparent from an outside fan's perspective.

"With that said, our new drummer is Paul Wandtke from Chicago, Illinois. With Paul, we took our careful time deciding exactly what had to happen and how.

"We spent our time checking out, trying out and feeling out many drummers this time around. After much deliberation, Paolo [Gregoletto, bass] said to Matt [Heafy, guitar/vocals] one day, 'You should hit up John Petrucci [DREAM THEATER] and see if he has an ideas.' We figured our friend John may have some ideas from the Berklee world. John brought Mike Mangini into the conversation and within minutes of describing our conundrum to Mike, he had a name: Paul Wandkte. Paul studied under Mike at Berklee, and obviously made an impression on a man we consider to be one of the greatest drummers on the planet.

"Paul made his debut with us in thunderous fashion this past weekend by playing to 40,000 fans at Knotfest Mexico. And he nailed it.

"We hope to work with Paul for a long time and we hope the TRIVIUM fans around the world welcome him with open arms."

Added Paul in statement: "I was blown away when TRIVIUM had contacted me. I have been looking for a place to call home all my life, a home of brothers with similar tastes in music, musicianship and goals.

"I'd like to thank DREAM THEATER's Mike Mangini for getting us in contact. I couldn't be happier, this is literally life-changing.

"Never give up, be yourself and rock on."

TRIVIUM in May 2014 parted ways with drummer Nick Augusto due to personal differences.

The band's latest album, "Silence In The Snow", debuted at No. 19 on The Billboard 200 chart, having shifted 18,000 equivalent album units in the week ending October 8.