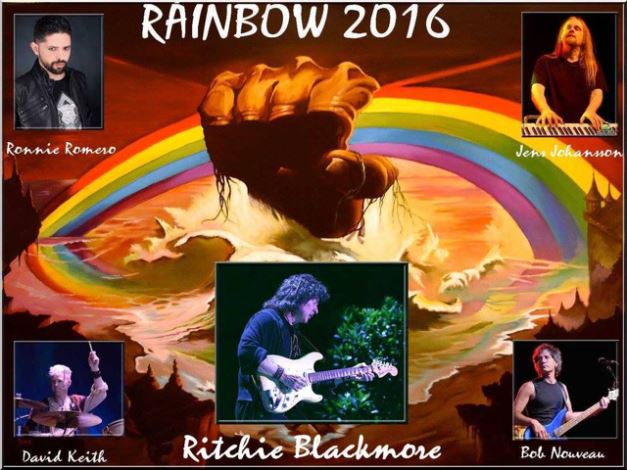 Deep Purple Italia recently conducted an interview with David Keith, the new RITCHIE BLACKMORE'S RAINBOW drummer who has also been sitting behind the kit for BLACKMORE'S NIGHT since 2012 (under the name of Troubadour Of Aberdeen). A couple of excerpts from the chat follow below.

Deep Purple Italia: How were you offered the position? Was it kind of natural for Ritchie to give you the call? Did you have to audition? Or both?

David: It did seem like a natural decision to me. There is a section of the BLACKMORE'S NIGHT live show where Ritchie puts on the Strat for a few songs, and we crank up the rock and roll. The energy on stage is amazing, and I often found myself thinking, "Man, I wonder if he's considering doing some rock shows… because this is f'ing fantastic!" I guess you could consider the last few years with BLACKMORE'S NIGHT my "audition." Ritchie approached me one night recently after a show, and casually mentioned that he was thinking of doing some rock shows, and that he'd like me to play them… you know, if I was interested. Ha! So I told him I'd think about it, and that was it. I was in shock — he's really going to do this, I thought, and I get to be a part of it! Unbelievable.

Deep Purple Italia: What can your style add in terms of personality and feel to the DEEP PURPLE and RAINBOW classics?

David: Your readers will pleased to know that my primary intention is to play the music as authentically as possible. I will be pulling parts from both studio and live recordings; anything I change or play differently will be with the original drummer and feel of the song in mind. Of all the other drummers Ritchie has played with, I would say my style is probably closest to Cozy's [Powell], but they have all brought different things to the table. I have the good fortune to draw from this vast well of drumming history, and create a new blend of parts for people to enjoy. I will add some of my own flavor to the mix, of course, but in subtle ways, always within the context and spirit of the original performances.

Deep Purple Italia: How is it working with Ritchie Blackmore?

David: Ritchie certainly has a reputation for being difficult to work with, but I have honestly found it to be easy. Ritchie knows what he wants, and will continue trying different things until the sound is right. I have no problem changing what I'm playing; I'm not out to prove anything to anyone. I simply want to play the song well. This is his music, his vision — so leave your ego at the door, listen and be flexible!

Blackmore will perform RAINBOW and DEEP PURPLE material at what will probably be four shows next year in Europe. The U.K. concert will take place on Saturday, June 25 at the Genting Arena in Birmingham. The performance will be Blackmore's first U.K. rock show in over 20 years. The two concerts in Germany will take place at the Monsters Of Rock festival on Friday, June 17, 2016 at Freilichtbühne in Loreley and on Saturday, June 18, 2016 at Festplatz am Viadukt in Bietigheim-Bissingen.

Blackmore plans to film and record the upcoming performances for future release.