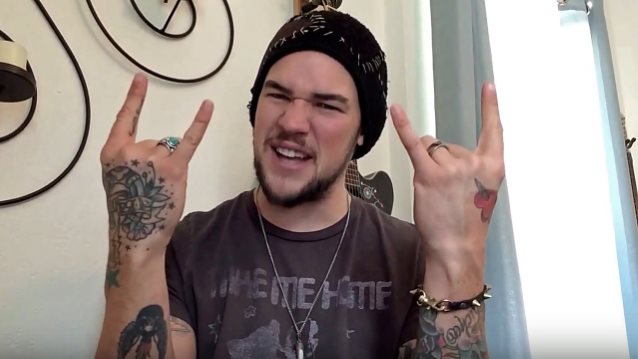 QUIET RIOT's seventh lead singer, "American Idol" finalist James Durbin stands by his statement that people who post negative comments on BLABBERMOUTH.NET are "bottom-feeding crotch goblins," explaining that he simply said "what a lot of people have been thinking throughout the years."

Durbin, who became known as the "metal guy" on 2011's season of "American Idol" after performing "Living After Midnight" and "Breaking The Law" with JUDAS PRIEST, joined QUIET RIOT earlier in the month after the dismissal of Seann Nicols (a.k.a. Sheldon Tarsha; formerly of ADLER'S APPETITE). Nicols was with QUIET RIOT for just a few months, but long enough to record the vocals for an early version the band's upcoming album, "Road Rage".

After Durbin blasted the "supreme scum" on BLABBERMOUTH.NET who have posted critical comments about his addition to QUIET RIOT, he defended his remarks during an interview with the "Trunk Nation" show on SiriusXM's Volume. He told host Eddie Trunk: "I've been getting so much positive feedback, and so many people are just super stoked and super pumped about this lineup and about coming to see us. And so it's all about keeping it on that wave of positivity. Yeah, there's places where people congregate to be unhappy, but, you know, you can't please those people, and those aren't the people coming to our shows to begin with."

He continued: "What's said is said, and I said what a lot of people have been thinking throughout the years. But, you know, if you wanna read more into that, there's plenty of gossip sites that keep posting things about me, so they're still talking. So that's the name of the game — is press."

Asked if he feels there are "pros and cons" to being a finalist on a mainstream reality show, especially when it comes to being embraced by the rock world, Durbin said: "Yeah, there's definitely pros and cons to it, but you take the good and you take the bad, you take 'em both and there you have [it]. There's definitely more good things that outweigh it. Of course, with anything, you're gonna have people that love it, people that hate it, people that are indifferent, people that just really don't care. And luckily, there's much more positivity and much more people that are super stoked about this than the thirty people going back and forth on a gossip site."

He went on to say: "To hear all these things and have people keep posting things and making attention out of it, I'm getting a lot of support from the hard rock and metal community, from the actual people that are doing it, and have been doing it throughout the years — the entertainers, the artists, the creative minds themselves; not the people that take something that took so much time and so much love and sadness and energy to create, and then just completely shit all over it. There's no point to that. I feel like, coming from an artistic stance, you can be indifferent to things and you don't have to like everything, but if you don't like it, just shut your mouth. You know? If you like it, fire off. I wanna hear it. If you don't, go away."

Durbin, who recently collaborated with QUIET RIOT guitarist Alex Grossi on the "Maps To The Hollywood Scars" EP, also explained his decision to join QUIET RIOT, saying that it was partly motivated by his desire to elevate the band's status to levels not seen in the decade following original singer Kevin DuBrow's death.

He added: "Even though I know Alex for the past four months, and two days of rehearsal — the only two times I've ever been in a room together with [QUIET RIOT drummer] Frankie [Banali] and Chuck [Wright, QUIET RIOT bassist] and Alex all together — I feel like we know each other already. I feel like I've known Frankie for years. And so it's this natural progression where I come in, I know the material, I'm prepared. I had two weeks to learn the sixteen-song set — more than other people that have had much longer time. And I come in, and I know it, and I'm happy to be there, I'm grateful to be there, I'm happy to be working with people that wanna work and love to play music.

"For me, the whole 'Idol' thing and everything all together, the reason I did was just so that I could be a working musician and play music for a living and support my family. And that's who I'm in a band with. So it's pretty cool. It's come full circle. But nothing in this music industry or the rock and roll world or anything comes without a price to pay, so whatever the ticket price is, I'll pay it. But you can guaran-damn-tee that I will be there every single night banging my head, making you feel the noise, and I will never phone it in, dial it in, make a gimmick of myself or this band, because they deserve it, Kevin DuBrow's legacy and memory deserves it, and QUIET RIOT deserves it."

QUIET RIOT announced last week that it would delay the release of "Road Rage" until this summer so that Durbin could replace all the vocals on the album with new lyrics and melodies.

Durbin will make his live debut with QUIET RIOT on March 18 at The Cotillion in Wichita, Kansas. A handful of additional North American dates will take place during the next two months.