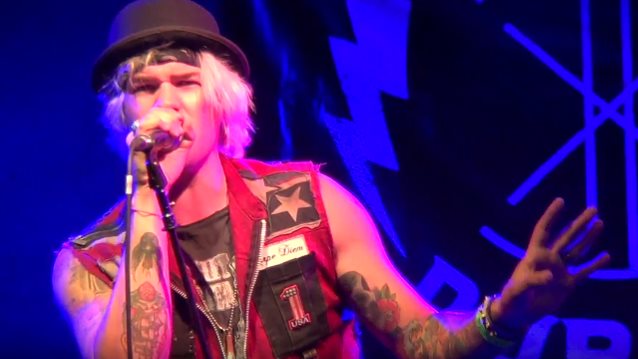 QUIET RIOT's seventh lead singer, "American Idol" finalist James Durbin was asked by Yahoo! Music how he will live up to the band's legacy but also bring something fresh to it. "I'm from a different generation, but have a lot of the same influences as [original QUIET RIOT frontman] Kevin [DuBrow], as I've been told — Steve Marriott of HUMBLE PIE and Robert Plant of the almighty LED ZEPPELIN, to name a few," he said. "With my youth, I hope to bring a fresh new energy to QUIET RIOT. I will perform these songs and entertain the fans in a way that pays tribute to Kevin DuBrow's intensity and enthusiasm, only in my own way."

Durbin, who became known as the "metal guy" on 2011's season of "American Idol" after performing "Living After Midnight" and "Breaking The Law" with JUDAS PRIEST, is fully aware of the fact that the rock world could be disdainful of the winner of a mainstream reality show.

"The people that trash 'Idol' and other [talent] shows only think one way," he said. "Some of the greatest songwriters, vocalists, and entertainers of our time have come from 'Idol'. You can't deny its power to find talent and potentially create superstars.

"I take my fair share of punishment and hate from the man-boys on the metal gossip sites, but they have nothing better to do, I guess," he continued.

"I'm blessed with loyal and supportive fans that have allowed me to maintain a career as an artist and working musician since my stint on 'Idol'.

"My wife Heidi and I run this independently as our family business, behind the scenes — designing, fulfilling merch orders, etc. There's a transparency there that is appreciated and respected by fans in this day and age."

Asked why he didn't join QUIET RIOT earlier, even though the band had reportedly been pursuing him for years, Durbin said: "It was never the right timing, I suppose… I was in talks to join QUIET RIOT last fall when Jizzy Pearl was leaving, but I had just signed on for a residency show in Las Vegas and unfortunately couldn't make both gigs work at the same time. Fast-forward to last week, and I'm quickly learning the set and couldn't be more excited to hit the stage… I believe everything happens for a reason, not just by chance. I'm very grateful for the opportunity."

Durbin, who recently collaborated with QUIET RIOT guitarist Alex Grossi on the "Maps To The Hollywood Scars" EP, said that QUIET RIOT will be his "main focus" going forward, but that he is still planning on releasing his own music, too, including the second volume of "Maps To The Hollywood Scars" and an acoustic album which will be released on his independent label, Wild Vine Records. "My plate is beginning to fill up, needless to say, but I will do my best keep this train a-rolling no matter how many cars are on the track," he explained. "I'm just thankful and grateful to be able to keep on making music and entertaining my fans — past, present, and future. Now it's time to bang your head and come on feel the noise."

QUIET RIOT's new album, "Road Rage", will be released on April 21 via Frontiers Music Srl. The disc features Durbin's predecessor, Seann Nicols (a.k.a. Sheldon Tarsha; formerly of ADLER'S APPETITE), who was fired after playing only five shows with the group. QUIET RIOT drummer Frankie Banali told Billboard that the split happened because of "serious creative and personal differences."

Banali revived QUIET RIOT in 2010, three years after original singer DuBrow's death, along with Grossi and bassist Chuck Wright. The group went through two vocalists — Mark Huff and Scott Vokoun — before settling on Pearl in 2013.