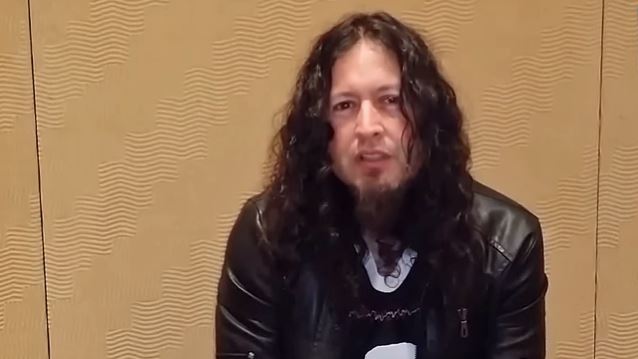 Fabio Pugliese conducted an interview with QUEENSRŸCHE guitarist Michael Wilton on June 24 in Rome, Italy. You can now watch the chat below. A few excerpts follow (transcribed by BLABBERMOUTH.NET).

On the current QUEENSRŸCHE lineup:

"Well, there's a new unity. There's a bond between the band, and everyone is on the same level. Everyone is participating as musicians, and things are moving along really great, and the songwriting is very cohesive. And you'll see the energy in the stage show and you'll just see the difference."

On whether there has been a change in QUEENSRŸCHE's approach to making music:

"As far as the members of the band QUEENSRYCHE, it's always been about pushing the creativity and evolving as a band, and we haven't changed in that aspect of writing. We just kind of more defined it in the last few years."

On some people's opinion that current QUEENSRŸCHE singer Todd La Torre's voice is very similar to that of the band's former frontman, Geoff Tate:

"The next album from QUEENSRYCHE is hopefully coming out the first week of October. We are doing a worldwide release, and very much expected. And the record label, Century Media, is the one that will be putting it out, and they have the demos right now and are very positive and happy about it. I know that a lot of people are really anticipating this, so stay tuned and you won't be disappointed."