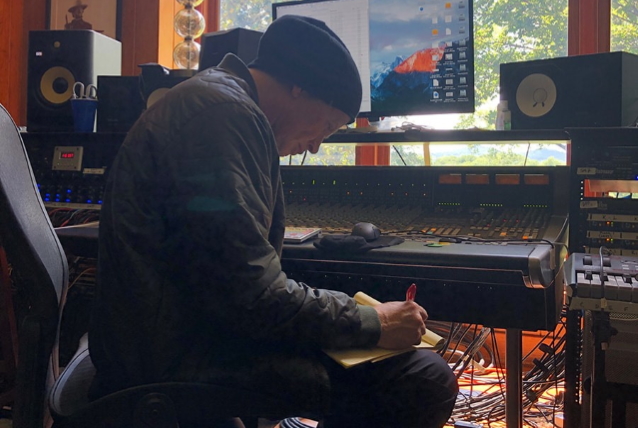 MEGADETH has shared a new photo of frontman Dave Mustaine working in pre-production on the band's upcoming 16th studio album. The sessions for the disc are taking place in Franklin, Tennessee with co-producer Chris Rakestraw, who previously worked on 2016's "Dystopia" album.

The 57-year-old MEGADETH leader announced his cancer diagnosis on June 17 on social media. He said that he has already begun treatment as part of a plan that his doctors feel has a "90% success rate."

Although most of MEGADETH's previously announced 2019 tour dates have been canceled as Mustaine undergoes treatment, the MEGADETH-curated Megacruise — which is set to take place October 13-19 — will still depart as scheduled, and the band will be a part of it in some form.

MEGADETH guitarist Kiko Loureiro recently said about the progress of the songwriting sessions for the band's new disc: "Every day, [Mustaine is] coming here and then we work — I don't know — a few hours, and then take a break, and he rests or [goes] and [does] something else, and then he comes back. So we might be working, like, five or six hours with Dave, and then a little bit more with the producer, with Rakestraw. We're listening to the stuff we did and changing little things and sometimes even trying to write new ideas. We have a lot of ideas here, a lot of songs. So while Dave has energy, we're working.

"We're not recording yet, so we're just composing — creating ideas and taking the time before we go to the studio," Kiko explained. "And it depends on Dave's ability to sing, of course. But he's playing guitar, so we're still developing the songs and ideas. That's what we're doing without any other more specific plan, because every day we see what's happening."

Kiko made his recording debut with MEGADETH on "Dystopia", whose title track was honored in the "Best Metal Performance" category at the 2017 Grammy Awards.

Mustaine and bassist David Ellefson are the two remaining original members of MEGADETH, which was formed in 1983, following Mustaine's dismissal from METALLICA.