According to InGoal Magazine, Chris Mason, the Canadian professional ice hockey goaltender who in May 2014 signed a one-year contract with the Augsburger Panther of the German ice hockey league Deutsche Eishockey Liga (DEL), is sporting a new mask, featuring another tribute to British heavy metal legends IRON MAIDEN in the shape of the band's mascot Eddie.

Airbrushed by Steve Nash at EyeCandyAir in Toronto, the new mask features Eddie on the left side carrying a Canadian flag as a nod to Mason's Canadian heritage. This is actually a rendition done by famed MAIDEN artist Derek Riggs, and is the cover art for Riggs' book, "Run For Cover". On the opposite side, Eddie The Trooper carries the German flag, paying homage to the country where Mason will play this year. This depiction of Eddie first appeared on the single cover art for "The Trooper" from the "Piece Of Mind" album.

Mason's other IRON MAIDEN-inapired masks are among the most popular stories ever on InGoalMag.com.

The 38-year-old Mason played full time in the NHL for nine years for three different teams, the Predators, the Blues and the Thrashers/Jets. 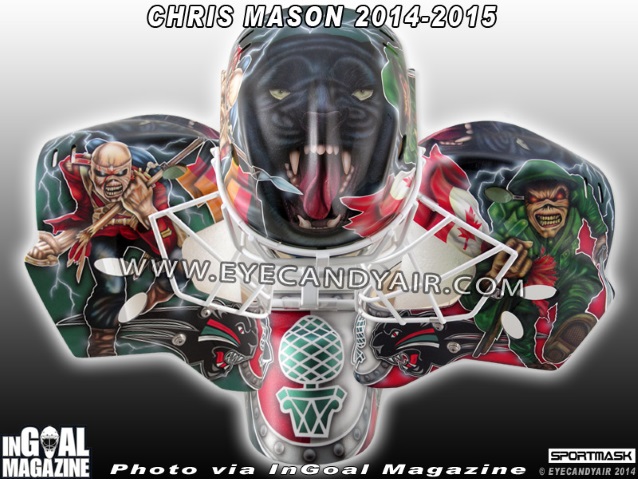