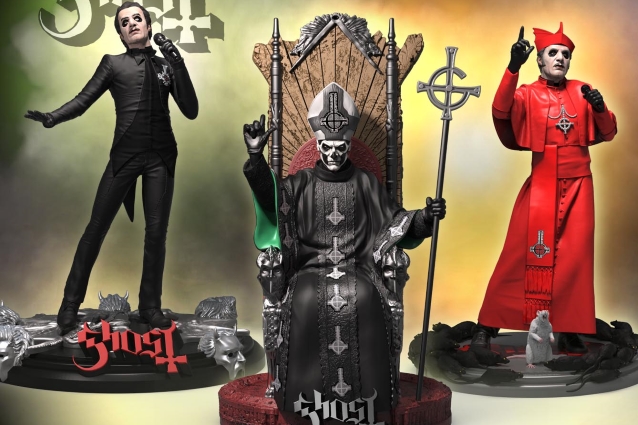 KnuckleBonz, creator of the Rock Iconz music collectible series, has announced the production of a new range of GHOST figures, available for pre-order now at this location.

Each of the new GHOST figures — Papa Emeritus II, Cardinal Copia in a red cassock and Cardinal Copia in a black tuxedo — is incredibly detailed and highly exclusive. Each one is hand-painted, numbered and comes with a certificate of authenticity on the base.

This is a limited-edition collectible; only 3,000 of each statue are made by hand and sold worldwide.

GHOST leader Tobias Forge recently said that his current stage persona, Cardinal Copia, has a very good chance of sticking around for the band's next studio album.

Forge performed as a "new" Papa Emeritus on each of the group's first three LPs, with each version of Papa replacing the one that came before it. Papa Emeritus III was retired in favor of Cardinal Copia before the release of last year's "Prequelle".

Forge told Billboard that he is already focused on the band's next recording project, with plans to be in the studio again by the beginning of 2020.

Highly exclusive each one is hand-painted, numbered and comes with a certificate of authenticity on the base of the statue.