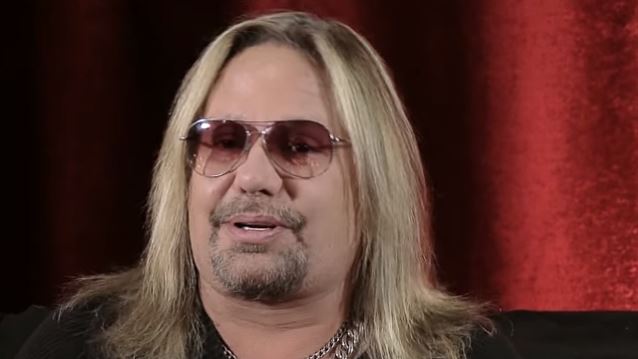 A woman who was at the Las Vegas hotel where Vince Neil allegedly assaulted an autograph seeker earlier in the month has posted video footage of her encounter with the MÖTLEY CRÜE frontman.

A YouTube user who goes by the name "TYESUN" has uploaded two short clips that she says were filmed as Neil was exiting Aria hotel on April 7 with his friend, actor Nicolas Cage. The first video shows Cage on his way out of the hotel with a woman following him closely behind taking pictures. The woman then appears to be jerked back by someone before Neil can be heard and seen yelling for the woman to stop filming. Neil then points back at "TYESUN" before Cage turns around and lefts his hands up in apparent attempt to keep from being filmed.

The second clip, which shows Cage restraining Neil with a light chokehold outside the hotel, appears to have been shot right before the widely circulated TMZ video that captured the actor playing peacemaker after Neil was allegedly trying to fight another individual. The TMZ clip was reportedly filmed after Vince was held for an hour by security and police had already ticketed the singer for battery.

A Las Vegas police spokesperson confirmed to Reuters that Neil was under investigation after the alleged victim told police that the singer came up from behind and grabbed her by the hair.

If convicted, Neil faces six months in prison stemming from the battery charges.

The singer's attorney, David Chesnoff, told the Daily News he is still investigating the incident.

"All I've seen is that there was an allegation of a simple misdemeanor battery," he said. "People shouldn't pre-judge things until all the facts are in."