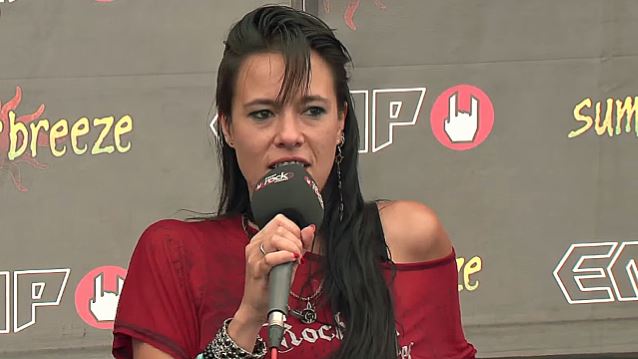 On how she landed the EVANESCENCE gig:

Jen: "I have no idea. [Laughs] No, seriously… My name was somehow recommended by a sweet friend of mine, Alex Skolnick of TESTAMENT, and Dave Eggar — he's also known as a very good cellist, and he's a musician working in New York. And all of a sudden, there was this e-mail popping up: 'Are you interested in joining…?' And I was, like, 'What the fuck?' So I stopped breathing until my face turned kind of blue. And then afterwards, I was, like, 'Okay, I've gotta read it again.' Three days later, I found myself suddenly on an airplane, flying over to New York to meet Amy Lee. And we had some very, very cool talks. She's an awesome person. She's a very, very great musician. And so I found myself suddenly inside of his empire called EVANESCENCE."

On the fact that she didn't even have to "audition" for EVANESCENCE:

Jen: "Yeah. To be honest, I was kind of concerned. I told [Amy], 'Do you want me to bring my guitar?' And, 'Would you like me to audition?' And she was totally, like: 'Nah, I know you can play. I've seen plenty of videos of you. And I know your live experience and you're touring the world, so… No, just come over and let's have some food and talk.' Yeah, and that's it. So, actually, what I was surprised by very, very much was that she actually had another guitar player on her list, and that was the guitar player of Alice Cooper [Nita Strauss]. And she's now with Alice Cooper and I'm now with EVANESCENCE. This is, like… I still can't believe it."

On how her life has changed since it was announced that she was joining EVANESCENCE:

Jen: "Well, I have to say, it became official the 7th of August. I have to say, in that moment when it went online, I was in Sweden for a guitar camp. It was in the middle of nowhere; there was nothing but a lake and thirty guitar players. And suddenly, all of a sudden, my phone kept [lighting up with message notifications]. I was, like, 'Okay, maybe it's official now.' What happened is that I received tons of e-mails every day; it was insane. It became okay in the meantime, but in the very first days, it was, like, between 1,200 and 1,500 e-mails every day. And, of course, a lot of people [congratulated me], and this is very sweet. I would like to say now, thank you to all of my colleagues and friends and partners in business and everybody who just [congratulated] me on that. It was like having a birthday or something."

On when fans can expect to see her perform with EVANESCENCE for the first time:

Jen: "We plan for November; it's three U.S. show in November. The first one is Friday the 13th [laughs], we're going to play in Nashville. Followed by the 15th of November, we're going to be in Dallas. The 17th of November is Los Angeles. And right after that, we're flying over to Tokyo [Japan] to be co-headlining Ozzfest."

On whether she will continue to play with EQUIBLIBRIUM and KNORKATOR while she is a member of EVANESCENCE:

Jen: "Of course. Well, for KNORKATOR, I have to say, I am not a steady member, as I don't play all the shows. This is pretty easy, because when I ever will be occupied by EVANESCENCE, I always can say, like, 'Guys, sorry. I'll be playing wherever.' But still, of course, I would like to continue, because I consider myself being good friends with the guys, and we talk a lot, even if it's not about stage shows, setlists, whatever. And EQUIBLIBRIUM, definitely. As long as nobody wants to see me being out of this band, I see no point for leaving EQUIBLIBRIUM."

On whether she will be involved in the making of the next EVANESCENCE album:

Jen: "I have absolutely no idea so far. All I am focusing right now is on [those] live shows in November. And, you know, we will see what's next."

EVANESCENCE singer Amy Lee stated about the band's split with longtime guitarist Terry Balsamo: "After two albums, countless adventures around the world and on the stage, Terry's time with EVANESCENCE has come to an end. As difficult as that is, we stand unified knowing it's the right thing for all of us. We will ALWAYS love you, Terry, and wish you all the happiness, health, and love in the world!"

She added about Majura: "After scouring the globe, I found EVANESCENCE's missing piece in South Germany. She plays like a supervillan, sings like an angel, and laughs like a great friend. We spent a few days together in New York sharing eerily familiar life stories, sushi, artistic inspiration, other people's shoes, and SO many laughs! (Yeah, okay, and maybe there were a couple of stiff drinks mixed in there) wink emoticon."

She went on to say: "We are all so excited to play together this fall and bring the show to a whole new level. CAN'T WAIT! I know you will show her all the love and respect a strong, talented woman deserves. I couldn't be happier to welcome our new sister to the band."