Gary Holt (EXODUS) and Jeff Waters (ANNIHILATOR) have recorded guest appearances on the new DESTRUCTION album, "D.E.V.O.L.U.T.I.O.N.", due on August 22 via AFM Records. It will be available in three different formats: standard CD, digipack and two-LP.

Commented DESTRUCTION frontman Marcel "Schmier" Schirmer: "Gary Holt and Jeff Waters play on 'Urge (The Greed Of Gain)'; the first solo is Gary, the second is Mike [Sifringer; DESTRUCTION guitarist], and the long third solo is Jeff. If you listen to his solo you'll know right away that it's him because he's got this picking style that gives you goosebumps."

A brand new DESTRUCTION track, "Vicious Circle - The 7 Seven Deadly Sins", is available for streaming on the band's MySpace page. The song comes off "D.E.V.O.L.U.T.I.O.N.", which was recorded at Hansen Studios in Ribe, Denmark with producer Jacob Hansen and features an additional guest appearance by UFO guitarist Vinnie Moore.

A 23-second "teaser" video for the forthcoming CD can be viewed below.

"Celebrating 25 years of DESTRUCTION is, of course, an additional motivation to record a new classic," DESTRUCTION frontman Marcel "Schmier" Schirmer previously stated. "But the band has never before been so well prepared for a recording, and the new material is very dynamic crashing straight in your face! All thrash maniacs can now look forward to a merciless and varied album which will put its predecessors in the shade! Beware!!"

There are also plans for a full DESTRUCTION DVD release later in the year — all in the cause of celebrating one-quarter century of classic German thrash metal with all the faithful fans worldwide.

DESTRUCTION's "Thrash Anthems" album, a collection of reworked/re-recorded versions of the band's classic tracks, was released in January 2007 via AFM Records. 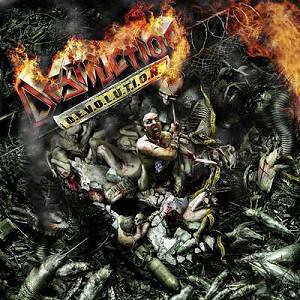